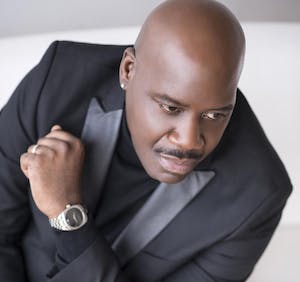 Women love Will Downing. And men love the women who love Will Downing. In his two decade recording career, the Brooklyn native has carved for himself a solid career as one of the leading purveyors of unapologetic, unabashed romantic music. And while this has not translated to crossover success – or even to broad urban radio success – it has gained for Downing a solid musical legacy and a rabidly loyal following of, well…women.

Celebrating his new release Euphoria, Downing had his first national exposure as a popular backing vocalist in the 80s before signing with Island Records. He recorded two modestly successful albums and had a minor hit with a cover of "A Love Supreme" before releasing his breakout 1991 album A Dream Fulfilled. It was a marvelous disc that showed Downing not only possessed a fine baritone voice but that he was also was an excellent song stylist, deftly handling such diverse songs as War's "The World Is A Ghetto" and Paul Davis's "I Go Crazy" and providing a stunning, definitive version of Angela Bofill's "I Try." Both the "I Try" single and the album hit the Urban top 25, and critical acclaim for the disc abounded.

A Dream Fulfilled began a period where Downing found his musical identity and was the first of a string of successful albums that focused on smooth, romantic music, mostly ballads. Sometimes unfairly lumped with his friend Luther Vandross, Downing was actually creating his own brand of love music that was less urban and much jazzier. And though Downing's songs were also more sensual than Vandross's, he shared Luther's sensibilities, singing to women on a truly romantic level that clearly went beyond the physical.

In the 90s and early 00s, Downing recorded frequently on multiple record labels. He became a regular at the top of the contemporary jazz charts and released a number of solid albums (perhaps the best of which was his album of duets with saxophonist Gerald Albright, Pleasures of the Night) with only one miscue (All the Man You Need, his lone album on Motown and an ill-advised attempt at an "urban" sound).

In early 2007, Will contracted a rare muscular disease, Polymyositis, which sidelined him for most of the year. It was a devastating attack, forcing Downing into a wheelchair for most of the year, and causing him to lose nearly 100 pounds. Despite the setback, he was determined to complete his debut album for Peak Records, After Tonight, for which he had recorded four songs prior to his illness. During the Spring of 2007, Will worked from his home putting down vocals despite severe weakness and fatigue. He would say it was "the hardest thing I've ever done," occasionally moving from chair to bed to complete a vocal piece. But out of this situation came another five wonderful songs, including the album's gem, "God Is So Amazing," a simple, melodic testimony of faith during difficult times. After Tonight became another fine addition to Downing's growing discography, and "God Is So Amazing" stood as one of the year's best songs.

In 2009, fully recovered, Downing began work on Classique, a new album of originals and three cover songs, with producer Rex Rideout at the helm. The disc was released in June 2009 to positive reviews. And in 2010, he issued one of his most ambitious projects, an "audio novel" called Lust, Love and Lies, that detailed a relationship going through various stages, with spoken interludes between a very strong batch of songs. It was released to enthusiastic reviews.

Looking back over the last two decades, Will Downing has established himself as one of the most consistent, soulful singers of his era and arguably, with the unfortunate death of Luther Vandross, as today's leading provider of romantic, soulful music.