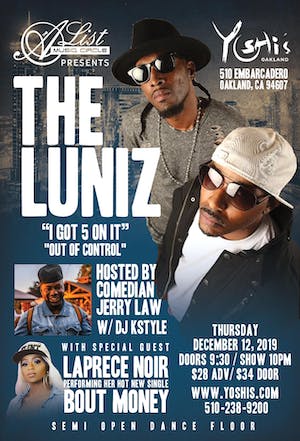 When it comes to grass rootz Bay Area hip hop & the rap game, the Luniz has earned their place among the best mccee's to ever grip the mic. This will be a night of phat beats & luni tunz with the energy of Num Skull & Yukmouth performing all the classic hitz including their new hit single " OUT OF CONTROL"; with special guest performance by female recording artist, LaPrese Noir & the hilarious comedian host, Jerry Law with DJ KStyle- Bay Area's #1 Music Video Mixer.

Presented by Mark Elliott and the A-List Musiq Circle -Your Bay Area's Who's Who Entertainment Network in association with Erroll Jackson & EJ Entertainment Presents.

Oakland rap duo Luniz, original named Luni Tunz, consisted of Yukmouth (Jerold Ellis III) and Numskull (Garrick Husbands), two friends who knew each other since junior high. The duo gained fame after six years together when they appeared on Dru Down's Explicit Game album. Their debut album, Operation Stackola, was released in 1995 and knocked Michael Jackson's HIStory off the top of Billboard Top R&B/Hip-Hop Albums chart on the strength of the Club Nouveau-sampling platinum hit single "I Got 5 on It," which featured guest vocals by Michael Marshall of Timex Social Club. The album's lyrics took novel, comic approaches to everyday occurrences as young men growing up in the streetz of Oakland. The song "I GOT 5 ON IT" was also remixed and re-released featuring some of Oakland's Hip Hop Legends Feat: Dru Down, Spice 1, Shock G, Humpty Hump & E40. Also anyone who's simply watched the trailer & movie Us by Jordan Peele's, has likely spent some time thinking about Luniz's "I Got 5 on It." The trailer, which dropped in late 2018, was enough alone to get people talking about the 1995 hit.

Flint Michigan's own LaPRECE NOIR ™, born Kenyatta LaPrece Dugans, the first lady of Crown Dynasty Records is a talented and dynamic Hip Hop/R&B artist, songwriter, and music producer. Her polished soulful, lyrical, yet granular sound has music lovers from all walks of life embracing her music.

This enticing female artist's versatility in her rhyme styles and sultry R&B voice has fans of her music and music artist (known and unknown) craving to be a part of her journey to the top of the music industry.

LaPRECE NOIR a.k.a. Mahogany credits her creativity and artistry to the likes of Nas, Lauryn Hill, Mary J Blige, and many more artists she grew up listening to as a youth in Flint.

LaPrece Noir a.k.a Mahogany credits her creativity and artistry to the likes of Nas, Lauryn Hill, Mary J Blige, and many more artists she grew up listening to as a youth in Flint.

Over the years she has transitioned from studio artist to featured artist and live performer. Her music has been featured on TV shows such as; Pit Bulls and Paroles, Rehab Party at Hard Rock and many more. Since relocating to Charlotte NC, she has been branding her mark on Carolina's music scene. Not only is she a dedicated music artist and businesswoman, but she's also an advocate for human rights and actively brings awareness to the issues that inhibit urban communities (especially in her hometown of Flint). From trendy, to conscious and everything in between, with fluidity LaPRECE NOIR ™ encompasses the art of music.

Mahogany is has dropped her new single titled “BOUT MONEY” in August of 2019 on all major platforms, a mere taste of what she has in store for fans of her music in the years to come, and with a name that means "black prophet" you can bet she's more than what meets the eye. All are welcome to take the journey with this sultry music artist/producer from the Mid-West. You won't be disappointed.

Jerry “Lucky” Law is one the fastest rising comedians hailing from Oakland, Ca.Since getting his start in 2014 at Tommy T’s in Pleasanton, Ca hosting for Paul Mooney and the late Dick Gregory. He has gone on to work with Deon Cole, Mike Epps and Dave Chappelle at Hollywood Improv. Jerry Law has also went on tour with Jess Hilarious and Ryan Davis in 2018 .

Jerry’s is a high energy comedian and his comedy is real and raw. He takes you on a humorous ride talking about his fatherhood, getting older and advice for men and women in life and relationships, as well as his lengthy incarceration and survivor awards. Keep on the look Jerry Law, he is destined to do great things in the world of comedy.

Produced by Erroll Jackson Presents & Mark Elliott of the A-List Musiq Circle - Your Bay Area's Who's Who Entertainment Network.