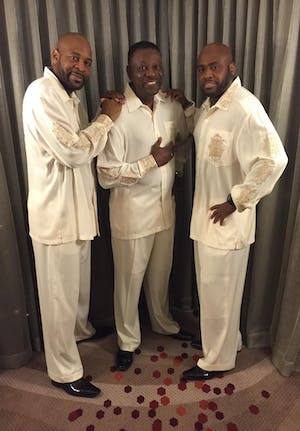 Greg Hill was a member of Wilbert Harts "original" Delfonics for more than 15 years. As the second tenor in Wil Harts Delfonics, Greg toured the United States and abroad performing for audiences worldwide. Greg performed on the 2005 PBS Special "Soul Legends" and also recorded an album with Wil Harts Delfonics entitled "Fonic Zone" that was featured on the TV series "Unsung". This CD also included a single with Platinum recording artist Rick Ross that was distributed by Universal.

After many years of touring & recording with Wil Hart (an original Delfonic) Greg decided to depart from the group and began touring with his own Delfonics "Tribute Show" which is called Greg Hill & THE DELFONICS REVUE. (no relations to Hart or the Delfonics trademark)

Greg and his Delfonics Revue has been in existence and touring for over 10 years and has established a solid fan base throughout the United States and abroad. The groups first concert appearance was in 2002 in which they co-headlined with Melba Moore and the rest is history!

The Delfonics Revue stage show is filled with many of the Delfonics greatest hits like; La La Means I Love You, Didnt I Blow Your Mind, Ready or Not & many more...just to name a few!

The original Delfonics is well known for their smooth harmony and legendary choreography that has brought them worldwide fame so needless to say, with many years of history and knowledge behind him, Greg Hill along with current members T. Moore and Benny "Primetime" Daniels (formerly of The Stylistics Revue continues to take the legendary "Sounds Of Philly Soul" to a new level in sight and sound!

Yes, there are several other Delfonic groups out there but the "GREG HILL DELFONICS REVUE SHOW" is not just another Delfonics show. Its a musical experience featuring the very best in classic soul! "Feel The Magic" of Greg Hill & The Delfonics Revue!