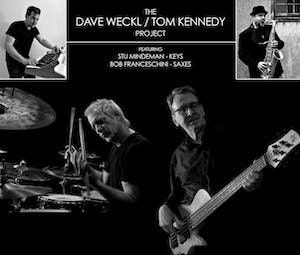 For more than 40 years, Dave Weckl has developed and maintained a reputation among fans, peers, and the international music community, as one of the great living drummers. His contributions to iconic music, music education, and the gear that drummers use, are many. Modern

Drummer magazine has inducted Weckl into their Hall of Fame (2000) and named him "one of the 25 best drummers of all time."

Weckl is best known for his work with Chick Corea, Mike Stern, The Brecker Brothers, Michel Camilo, Lee Ritenour, Oz Noy, and his many solo projects.

Tom Kennedy is an accomplished touring and studio musician who ranks as one of the top acoustic and electric bass players in the world. His credits include performances and recordings with both mainstream legends and leading contemporary players.

Tom has released five solo CDs: Basses Loaded in 1996, Bassics in 2004 featuring Mundell Lowe and Joe LaBarbera, Just for the Record in 2011, featuring Dave Weckl and Mike Stern, and Just Play! in 2013 featuring Lee Ritenour, Renee Rosnes and George Garzone. His most recent solo project, Points of View, released in 2017.

LA Weekly writes that Tom’s playing is “nothing short of inspiring.” His reputation as a master of his craft is evident among fans worldwide.

Bob has played sax and various woodwinds on many TV and film scores for directors Sidney Lumet, Paul Schrader and many more. He also played on countless commercial jingles. Franceschini has played on more than 200 CDs.

Stu Mindeman was Introduced to the piano at four years-of-age. He spent his formative years in Santiago, Chile, and Chicago, and quickly realized that he wanted to pursue a life in music. He maintains a busy performance schedule throughout the world and also works behind the scenes as a composer, arranger, and producer.