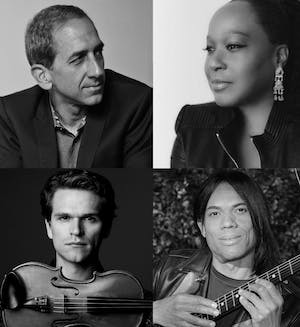 Join Tammi Brown and The Lost American JazzBook as they celebrate the release of their new CD, “Taxonomy of Pleasure”.

Tammi Brown has performed with everyone from Quincy Jones to S. Jordan to Spyro Gyra to Linda Tillery and the Cultural Heritage Choir. Her roots are in gospel and jazz. Tammi’s musical journey has taken her to many stages in over 10 countries including solo performances at the famous Apollo Theater in Harlem, The Monterey Jazz and Blues Festivals, and venues throughout Europe.

Here's what multi Grammy-winning producer Kabir Sehgal has written about Tammi. “Tammi Brown has a storied career as a performer, equally comfortable with soulful gospel as with modern, forward-pushing jazz. Her refined phrasing and powerful voice have an almost hypnotic effect as she inhabits each song and mesmerizes with fresh renderings. Tammi’s singing can’t be fully appreciated without knowing something of her family history. Her mother was a French- speaking Egyptian born in Toulouse, France and raised in Baton Rouge, Louisiana. Such a “global” lineage has shaped her aesthetic sensibilities in becoming a world-class artist.”

Special guest Mads Tolling is a two-time Grammy-winning violinist, and is considered to be one of the finest jazz violinists in the world today. Mads was part of the original JazzBook ensemble and returns to bring his singular expressive vision to the music.

S. Jordan is the consummate guitarist, traversing styles and genres from Miles to Hendrix to Bartók. His unique style of "tapping" on guitar opened a whole new world of musical possibilities. Because of his love and respect for Tammi Brown as an artist and a person, he added one more stop on his torrid schedule to join the JazzBook onstage, as well as on the new CD.

The Lost American JazzBook is a revisioning of the American art song tradition—the jazz standard. It consists of original compositions inspired by everyone from Billy Strayhorn to Thelonious Monk to Antonio Carlos Jobim. The concert features songs from the new JazzBook album, “Taxonomy of Pleasure”, and from the first album which won “Jazz Vocal Album of the Year” from the 14th Independent Music Awards. JazzBook is the creation of Albert Greenberg, founder of the performing arts nonprofit, Black Swan Arts & Media, in collaboration with jazz pianist extraordinaire Dan Zemelman.

You can watch a live performance excerpt at: lostamericanjazzbook.com/video