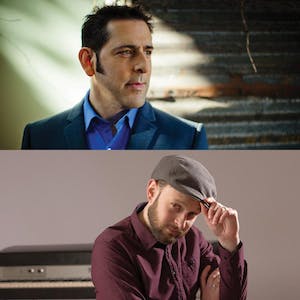 A jazz pairing of sax and keys

Saxophonist Steve Cole is one of the most celebrated players in contemporary jazz.

The Chicago native exploded onto the scene in 1998 with the album “Stay Awhile” that was produced by fellow Chicagoan Brian Culbertson. The disc scored two #1 hits and earned Cole the Oasis Smooth Jazz Award for best new artist shortly before his sophomore set, “Between Us,” was released in 2000. His catchy singles made him an instant radio favorite and he cranked them out with regularity on subsequent albums “NY LA” (2003), “Spin” (2005, “True” (2006), "Moonlight" (2009), and "True" (2013).

In addition to his work as solo artist, Steve has performed/recorded, with Junior Wells, Buddy Guy, Boz Scaggs, Larry Carlton, Jeff Lorber, Jim Peterik, Freddie Cole, Cyrus Chestnut, and KMFDM, and has been a featured soloist with the City of Prague Orchestra, and The Chicago Symphony Orchestra. Steve is also a founding member of The Sax Pack, a stellar sax trio completed by Marcus Anderson and Jeff Kashiwa.

Known for consistently cranking out chart-topping singles that deploy big vibrant pop hooks, contemporary jazz saxophonist Steve Cole conjures a sonic escapade with the hypnotic “Mirage,” the first single from his forthcoming eighth album, “Turn It Up,” which will be released July 15 by Artistry Music. Radio programmers were instantly spellbound, making the track from the David Mann-produced set of R&B vibes and soul-powered sojourns the No. 1 most added single on the Billboard BDS chart.

The entrancing single on which electronic beats bombard the senses before chill tenor and soprano sax leads and a soothing trumpet undercurrent take command of the illusion is one of nine new songs on the session, eight of which were composed or co-composed by Cole. The tune reflects his hometown roots and ardor for Chicago’s dance music scene. It’s one of three major cities that helped shape the collection.

He began writing and recording music as part of jazz funk duo ‘Sugar and Silk’ in the late 1990’s. The pair released 2 albums to much European acclaim and this grabbed the attention of Trippin’N’Rhythm Records’ CEO Les Cutmore who signed Oli on a multi-album deal which first gave us his debut solo CD ‘So Many Ways’ in 2006.

Fast forward just over a decade, and Oli now has 5 CD’s to his name, all under the Trippin’N’Rhythm label. The most recent, released in July 2016 is entitled ‘Where I Left Off’ and the first single, top 10 Billboard hit ‘Take Me Away’. Oli has had many chart topping radio singles over the years, most notably one of the biggest hits of 2009 ‘Chill Or Be Chilled’, and also the 2014 number one hit featuring bassist Julian Vaughn ‘At Your Service’.

Oli remains one of the most dynamic and energetic keyboardists in the genre, and his unique mix of jazzy instrumentals, funky vocal cuts and down right dirty ol’ school keytar and vocoder, give his live shows that real wow factor and have garnered him a loyal and dedicated US fan-base! Oli has toured his music extensively across the globe, from Mozambique to Australia, Mallorca to Poland, Middle-East to Mid-West. He’s also become a regular face on the annual D. Koz Cruise, as part of the much-loved band of Brits ‘The UK Collective’.

Oli’s skills as a keys player have made him the UK go-to guy for some of the genre’s biggest artists such as Gerald Albright, Chuck Loeb, Boney James, D. Koz. His credentials as a musical director are also far reaching, most notably for 4 years at the Dubai International Jazz Festival – overseeing some 30+ artists on the Jazz Garden Stage.

When off stage Oli is also a sought-after smooth jazz producer, his most recent achievement scoring a Billboard #1 hit in December 2017 with US artist Michael Thomas. Oli has also composed music for TV (Oprah Winfrey, MTV, Miami Ink), has produced the audio for countless smartphone gaming apps for Zynga Games, and now works in a freelance capacity; designing music and sound solutions for both online and land-based casino slots.