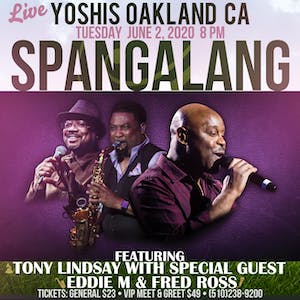 Tony Lindsay, Internationally known, 11 time Grammy winner, Lead singer with Santana for 25 years. Tony has a very extensive list of performances and recording with other Grammy award winners. He also performs with local groups, The Soul Soldiers, The Mike O’Neill Quintet, The Ray Charles Project and many more. Tony has 5 Solo Cd’s, his current one is Titled “Something Beautiful “ which has seen 4 top ten hits, 2 of them No 1 so far on the Independent soul charts.