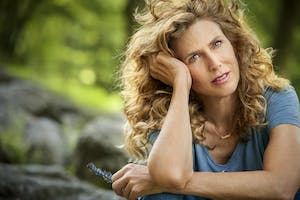 Legandary songstress, Sophie B Hawkins has been tugging at heartstrings for decades with her powerful storytelling, crafting dizzying tunes that idle between the potently forlorn and the strangely comforting.

After a stretch in Los Angeles the iconic singer-songwriter has come home to New York and is ready to enchant once more with her eloquent lyrics, breathtaking vocals, and multiinstrumental talents.

Born and raised in New York City, Sophie has always been an artist at heart. After attending Manhattan School of Music as a percussionist for nearly a year, Sophie left to pursue a professional music career. She got her big break playing percussion for Bryan Ferry, and after he fired her she was inspired to write the hit single “Damn, I Wish I Was Your Lover”.

Her first album, Tongues and Tails, full of primal, fiery pop, was an immediate success, earning her a Grammy nomination for “Best New Artist.” Sophie followed that with Whaler, which featured the smash ballad, “As I Lay Me Down,” which remains the longest-running hit single in the Billboard charts in American history. The album, as equally gutsy as her first yet an atmospheric departure sealed her rising reputation for musical breadth and lyrical depth.

Sophie’s third album, Timbre, in which she broke out into a more earthy, strippedback sound that aimed at the core of her personal expression, was released in 1999. The fight with Sony over use of the banjo was a defining moment and Sophie received positve support over her stance for artists, even Billboard magazine supported her struggle.

In a move toward artistic independence, Hawkins worked out an arrangement that would allow her to leave her label while retaining the masters to Timbre. She re-released the album on her newly born label Trumpet Swan Productions – then hit the road, on her own this time, just Sophie and her band touring the country in a station wagon.

2004’s Wilderness saw Sophie diving into a jazzier style for what would become her most musically layered and emotionally complex album yet, and the first recorded entirely in her Los Angeles home studio. Playfully exploring a collage of musical influences and her own multi-instrumental talents, Hawkins played guitar, cello, keyboard, drums and a variety of exotic percussion on a recording Rolling Stone singled out for its “dreamy charm.”

The roiling energy and close intimacy of Hawkins’ live shows was captured in 2006’s Bad Kitty Board Mix, a two-disc set recorded in Seattle. Spotlighting her improvisational instincts, Sophie says she wanted this live album to be something different, “not just the songs you already know, but what they become in front of you, totally raw, exposed and new every night.”

The Crossing, released in 2012, is a searing, lush and startlingly naked chronicle of the most intense period of Sophie’s life, in which she has come to terms with her father’s death, openly surrendered to the haunting specter of her past, discovered the exhilaration of motherhood and arrived at a profound reckoning of acceptance. All of this emerges in songwriting and vocals that mix the brashly playful and the unabashedly poignant in fresh ways for Hawkins.

During this same period, Sophie displayed her versatility starring as Janis Joplin in the stage musical Room 105, receiving rave reviews during its successful sold-out run. Sophie has proven herself a resonant and enduring artist, earning six New York Music awards as well as an ASCAP award for “As I Lay

Me Down”. in addition to collaborating with Tony-award winning Broadway legend Thomas Meehan, Sophie has also performed and collaborated with some of the biggest names in the industry, including Chris Isaak, Melissa Etheridge, Sting, Mary Steenburgen, and Jennifer Love Hewitt. Her music has been a part of major television shows and films such as Dawson’s Creek, Party of Five, Community, The Blacklist, 40 Days and 40 Nights, Mrs. Winterbourne, Harold and Kumar Escape Guantanamo, Bounce, New Years Eve, Northern Lights, Now and Then, The Associate, Mr. Wrong, Cloudburst, and others.

Today Sophie is preparing to release her next album, and loving working on her original Playsical, hoping to be in production soon. She has two children and currently resides in Brooklyn, NY.