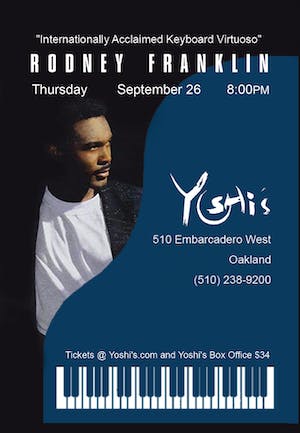 Internationally acclaimed keyboard virtuoso, Rodney Franklin, is one of a stellar cast of contemporary music masters blending jazz, pop and soul. His dynamic style of keyboard playing has earned him critical acclaim worldwide and helped define the jazz fusion style.

Educated in jazz and classical piano from the age of three, Rodney showed a natural talent for the keyboard. The young prodigy committed his early years to perfecting his craft after meeting Oscar Peterson and Duke Ellington when he was just a little boy. By the age of 16, he had earned First Prize in more than seventy piano competitions including The Edward Kennedy-Duke Ellington Award and Contemporary Keyboard magazine’s Piano Award. By 19, he’d signed his first contract with CBS Records after being discovered by the legendary producer, Bluenote’s George Butler. By the time he was 22, Rodney had played Carnegie Hall. During his years at CBS, he recorded eight albums accompanied by the most notable musicians in his field.

Rodney Franklin now has fourteen recordings to his credit and has played on countless other recordings. He recently participated in the book of American Musical Keyboard Masters, “Down the Rhodes.” This historic book is accompanied by a documentary film tribute to the Fender Rhodes piano, the most successful electric piano of our time. Maestro Franklin is joined in this venture by George Benson, Herbie Hancock, Patrice Rushen, Marcus Miller, George Duke, Bob James, Chick Corea and Robert Glasper, to name a few.

From a young prodigy who was mentored by some of the 20th Century’s greatest artists, a lifetime of experience has rendered Mr. Franklin a seasoned musical master in his own right. His next release is due out later this year.