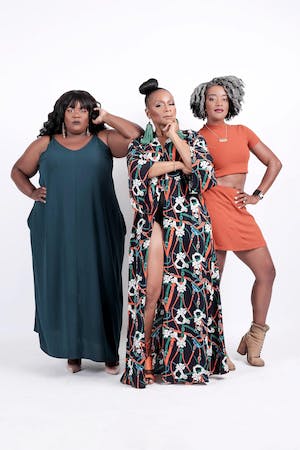 Joi Rhone Presents invites you to come and start off Thanksgiving weekend with three QUEENSGIVING you an evening of musical nourishment!

Affectionately dubbed "Sangin'" Sara, she has been singing since the age of 2. Sara's musical stylings encompass all of the genres by which she has been influenced. At the age of 11, she began her studies in classical music. In high school she discovered a love of jazz music, and began to study such notables as Sarah Vaughn, Ella Fitzgerald, and Billie Holiday. Also an alumna of Dartmouth College, Sara served as the Gospel Choir Director.

Sara has performed for many events, including a celebration for San Francisco’s Japanese Consul General, the SF Public Defender Swearing in Ceremony, as part of the Inauguration of Mayor London Breed, the 1st African American Female Mayor of San Francisco, and, the 1st be INVINCIBLE Women’s Summit, hosted by Mayor London Breed. She is currently an international touring background singer.

Sara also curates and presents many workshops, and works with various schools, and youth and religious organizations, serving as a teacher, director, and/or consultant.

entertainer, maintaining a prolific career as a recording artist, performer, songwriter, actress, and event host. Nate’ hails from a musical family, making her first entry into the business as co-founder of a pre-teen gospel duo, Young Revelations. But it was her breakout performance at her graduation from East Oakland’s Skyline High School that led her to pursue a professional music career.

Nate’ hit the airwaves with her own single, “Heart Heals”; a smooth, mid-tempo slice of R&B which was prominently featured on the Bay Area’s major urban radio station, KMEL, as well as in local clubs. She went on to share stages with an impressive range of artists like Kelly Price, Patti Labelle, Lenny Williams, Shalamar, Dionne Warwick, Neal Shcon (Journey), Narada Michael Walden, Martha Reeves, REO Speedwagon, Peter Frampton, Michael Henderson, and more. The Soulsanger can also be heard providing background vocals on “Power of Peace”, an album rendered by Carlos Santana and Ron Isley.

The Soulsanger’s voice and music are both real, raw, and always honest. She doesn’t go for the trendy commercial approach, which speaks to why she is truly THE SOULSANGER, timeless!

When the word music comes to the mind of thoughtful “4A”: Actress, Athlete, Artist, Activist RyanNicole, it conjures memories of Panasonic headphones too big to fit her ears and vinyl records strewn across the living room floor of her childhood home in Oakland, CA. Raised on a healthy diet of diverse music ranging from Parliament to Flora Purim, Pat Metheny to Queen Latifah, RyanNicole’s approach to music is reverent to say the least.

Coming of age in a time when hip-hop reigned supreme, the genre further refined her appreciation for sharp lyricism. Inspired by female emcees like Lauryn Hill, without denying the prowess of those like Lil Kim, RyanNicole offers a welcomed sexy intelligence to the game.

Her debut mixtape, entitled “Dis’onance: Vol. 1” audibly and metaphorically explores the concept of discord through a pop-culture lens [dissonance (n.) - lack of harmony between persons or things], and bears witness to the eerie attraction we all have to disharmony. Her most recent project "Nexus", with partner in rhyme, K.E.V. is an unabashed dedication to the souls of black folks. Never easy, yet highly digestible; even tasty: RyanNicole harvests a flavor for every palate, encouraging one to savor her offerings long after she’s left a stage. She is lasting, her words timeless and thick. RyanNicole is an instant classic, reviving artistry and industry in this modern era.