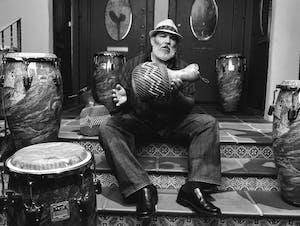 A kaleidoscope of Latin percussion

For more than three decades as both a leader and a sideman, conguero Poncho Sanchez has stirred up a fiery stew of straightahead jazz, gritty soul music, and infectious melodies and rhythms from a variety of Latin American and South American sources. His influences are numerous, but among the more prominent figures that inform his music are two of the primary architects of Latin jazz – conga drummer and composer Chano Pozo and trumpeter Dizzy Gillespie. Sanchez pays tribute to these two titans on his new album, Chano y Dizzy!, his 25th recording as a bandleader on Concord Picante, set for release on September 27, 2011. For the first time, Sanchez and Francisco Torres, long time band member (trombone/vocals), join forces to produce the new album.

Joining Sanchez on the 11-song set is multi-GRAMMY winning trumpeter Terence Blanchard. It makes sense that, for this project, Sanchez recruited fellow label mate Blanchard, a New Orleans native who literally grew up amid the Cuban and Latin jazz scene and a longtime fan of the music’s multicultural underpinnings. Blanchard has established himself as one of the most innovative and influential jazz musicians and film score masters of his generation. As a film composer, Blanchard has more than 50 feature film scores to his credit. Currently at work on the score for George Lucas’s long-awaited upcoming movie, “Red Tails,” the Golden Globe nominee and four-time Grammy winner’s music was recently featured on Broadway in Chris Rock’s Tony-nominated play, “The Mother****** With Hat.” Blanchard is currently at work on the music for the Broadway remake of A Streetcar Named Desire and has also been commissioned by the Opera St. Louis for a project that will premiere in 2012. His latest CD, Choices, was released by Concord Jazz in 2009 to widespread critical acclaim.

“These two musicians were the pioneers of what is now known as Latin jazz,” says Sanchez. “Chano Pozo was a genius. He’s considered the godfather of conga drummers, and he’s someone whom I respect a great deal. And of course, Dizzy Gillespie was an iconic artist in American jazz. I had the honor and pleasure of working with him on several occasions. These guys were the first musicians to bring elements of Latin music to American jazz – which has resulted in some of the greatest music of the last 50 or 60 years. I felt that it was time to pay tribute to them and their accomplishments.”

“The great thing about this band is that they take a very traditional approach to Latin music,’ says Blanchard. “They pay a lot of attention to the detail of the specific rhythms they’re playing, and they understand the historical significance of keeping that heritage alive.”

Although born in Laredo, Texas, in 1951 to a large Mexican-American family, Sanchez grew up in a suburb of L.A., where he was raised on an unusual cross section of sounds that included straightahead jazz, Latin jazz and American soul. By his teen years, his musical consciousness had been solidified by the likes of John Coltrane, Miles Davis, Cal Tjader, Mongo Santamaria, Wilson Pickett and James Brown. Along the way, he taught himself to play guitar, flute, drums and timbales, but eventually settled on the congas.

At 24, after working his way around the local club scene for several years, he landed a permanent spot in Cal Tjader’s band in 1975. “I learned a great deal from Cal,” says Sanchez, “but it wasn’t as though he sat me down and taught me lessons like a schoolteacher. Mostly it was just a matter of being around such a great guy. It was the way he conducted himself, the way he talked to people, the way he presented himself onstage. He was very elegant, very dignified, and when he played, he played beautifully. The touch that he had on the vibes – nobody has that sound. To me, he was – and is, and always will be – the world’s greatest vibe player.”

Sanchez remained with Tjader until the bandleader’s death in 1982. That same year, he signed with Concord for the release of Sonando, an album that marked the beginning of a musical partnership that has spanned more than 25 years and has yielded more than two dozen recordings. Chano y Dizzy! is the latest installment in that ongoing partnership.

Sanchez, Blanchard and company set the tone early with an opening medley of lively Pozo tunes: “Tin Tin Deo,” “Manteca” and “Guachi Guaro.” Blanchard delivers down some sultry trumpet lines over Sanchez’s percussion and vocals, while the rest of the band lays down a solid and spicy rhythmic bed throughout.

The followup track is a simmering rendition of Dizzy’s “Con Alma,” with numerous tempo changes that give Blanchard room to flex his muscles in varying rhythmic contexts within a single song.

Further in, “Siboney” is an old Cuban song by Ernesto Lecuona that’s consistent enough with the overall vibe of the record to make the cut. “Ron Bake called me and said, ‘Poncho, I’ve always liked this tune, but Chano didn’t write it and neither did Dizzy.’ I said, ‘It’s alright. It fits. It’ll be fine.’ I’ve always liked the tune myself, so I was glad that we finally got a chance to record it. I think it complements the artists and the period we’re paying tribute to.”

The light-hearted “Groovin’ High” is a Gillespie composition originally conceived as a swing tune, but Sanchez and company rearranged it here to fit more of a mambo vibe. The funky “Harris’s Walk,” another song penned by Blake, was written in the style of Eddie Harris, “but I liked it so much at rehearsal that I said, ‘We gotta put this on the record,’” says Sanchez.

“Jack’s Dilemma,” written by Francisco Torres, came together on the fly with a stripped down rhythm section consisting of Sanchez on conga and Joey De Leon on trap drums. “There are no timbales, no bongos,” says Sanchez. “The engineers in the studio sort of slapped together a drum set. Joey tuned them the way he wanted, and man, ten minutes later we were recording. In the end, I think it sounded great.”

The album ends just as it starts, with a staccato and highly rhythmic Pozo tune called “Ariñañara.” Recorded by several artists through the years, the song is what Sanchez calls “straight-up hardcore salsa music.” It serves close to a recording that celebrates some of the most innovative music to emerge from the 20th century.

“To me, Latin jazz is the world’s greatest music,” says Sanchez. “It has the melodic and harmonic sophistication of jazz and American standards, and the flavor and energy of Latin American music. What I’m most proud of is that this music – while it may sound exotic at times – is from America. It was born in New York City, when Chano Pozo met Dizzy Gillespie for the first time in the mid-1940s. They created something that didn’t exist before in this country. I’m very proud to take this music all over the world all the time.”

This biography is property of Concord Music Group, Inc.