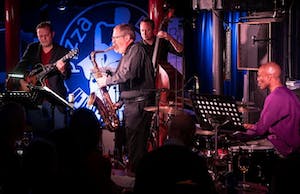 Saxophonist Jed Levy & guitarist Phil Robson bring a new quartet to California, featuring drummer Billy Drummond and bassist Peter Slavov. This ensemble was first assembled for a successful tour of Europe in November 2018, culminating in a stellar performance that received critical acclaim at the London Jazz Festival. Following their East Coast spring and summer concerts, including a riveting performance to a full house at the Birdland Theater, NY, the quartet makes their first outing to the West Coast.

The original music written by Phil & Jed is innovative and contemporary whilst drawing on the vast tradition of jazz, across the whole spectrum of styles. The emphasis is on strong melodies and the tunes are vehicles for improvisation, allowing each musician to bring their experience and to make them their own. This will be the very best musical melting pot.