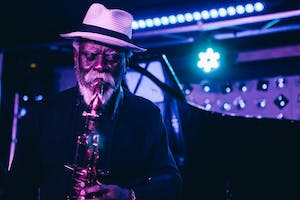 Pharoah Sanders possesses one of the most distinctive tenor saxophone sounds in jazz. Harmonically rich and heavy with overtones, Sanders’ sound can be as raw and abrasive as it is possible for a saxophonist to produce. Yet, Sanders is highly regarded to the point of reverence by a great many jazz fans. Although he made his name with expressionistic, nearly anarchic free jazz in John Coltrane’s late ensembles of the mid-’60s, Sanders’ later music is guided by more graceful concerns.

The hallmarks of Sanders’ playing at that time were naked aggression and unrestrained passion. In the years after Coltrane’s death, however, Sanders explored other, somewhat gentler and perhaps more cerebral avenues — without, it should be added, sacrificing any of the intensity that defined his work as an apprentice to Coltrane.

Pharoah Sanders (his given name, Ferrell Sanders) was born into a musical family. Sanders’ early favorites included Harold Land, James Moody, Sonny Rollins, Charlie Parker, and John Coltrane. Known in the San Francisco Bay Area as “Little Rock,” Sanders soon began playing bebop, rhythm & blues, and free jazz with many of the region’s finest musicians, including fellow saxophonists Dewey Redman and Sonny Simmons, as well as pianist Ed Kelly and drummer Smiley Winters. In 1961, Sanders moved to New York, where he struggled. Unable to make a living with his music, Sanders took to pawning his horn, working non-musical jobs, and sometimes sleeping on the subway. During this period he played with a number of free jazz luminaries, including Sun Ra, Don Cherry, and Billy Higgins.

In 1964, Coltrane asked Sanders to sit in with his band. The following year, Sanders was playing regularly with the Coltrane group. Coltrane’s ensembles with Sanders were some of the most controversial in the history of jazz. Their music represents a near total desertion of traditional jazz concepts, like swing and functional harmony, in favor of a teeming, irregularly structured, organic mixture of sound for sound’s sake. Strength was a necessity in that band, and as Coltrane realized, Sanders had it in abundance.

Sanders made his first record as a leader in 1964. After John Coltrane’s death in 1967, Sanders worked briefly with his widow, Alice Coltrane. From the late ’60s, he worked primarily as a leader of his own ensembles.

In the decades after his first recordings with Coltrane, Sanders developed into a more well-rounded artist, capable of playing convincingly in a variety of contexts, from free to mainstream. Some of his best work is his most accessible. As a mature artist, Sanders discovered a hard-edged lyricism that has served him well.