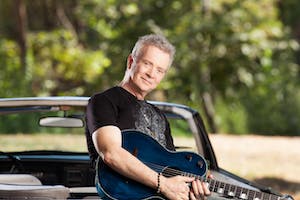 Like so many millions of us, guitarist Peter White still feels closest to the music he absorbed while growing up. As a British teen in the ’60s, he kept his ears glued to the radio—soaking up the exciting new sounds of rock bands like the Beatles and soul giants like Stevie Wonder—and tried to learn how to play those songs on the acoustic guitar his dad had given him. It didn’t take him long to get the hang of it, and now, after more than four decades as both a leader and sideman, he’s returning to those tunes that impacted him so forcefully in his youth.

Groovin’, set for release on October 28, 2016 via Heads Up, a division of Concord Music Group, is White’s third collection of guitar-centric interpretations of timeless compositions from those halcyon years of the 1950s to the ’80s. Taking up where his previous all-covers albums Reflections (1994) and Playin’ Favorites (2006) left off, Groovin’ finds White not only nostalgic but adventurous and playful, injecting vocal shadings and bold horn charts into the mix, and even some tougher guitar sounds than he’s generally known for.

“I always gravitate toward this era,” says White about the songs he chooses to cover. “At that time the music meant more to me than at any other time in my life.”

Groovin’ takes its title from the Rascals’ tropical-hued ballad hit of 1967, and also includes, from that heady decade, the Beatles’ “Here, There and Everywhere.” From the same era, the R&B classic “I Heard It Through the Grapevine,” a hit for both Marvin Gaye and Gladys Knight, gets a distinctive new reading here by White, as does Otis Redding’s timeless “(Sittin’ On) The Dock of the Bay.” The oldest tune, “Sleep Walk,” was a number one instrumental hit in 1959 by Santo and Johnny in the United States, but White actually heard it first by the Shadows, a British guitar combo massively popular in the U.K. that never really caught on in the States. For White, the challenge in interpreting such familiar music is in putting his own stamp on a number while retaining the characteristics that make it instantly recognizable.

“I like playing covers because if you can take a song that people know, by a well-known artist, and make it your own, then you have defined yourself as an artist,” he says. “Frank Sinatra and Elvis Presley did that and no one complained. One of the purposes in my making these cover albums is that I want to be very faithful to the melody. But I ask myself, if I had just come up with this idea and it had never been recorded before, how would I record this song? Do I need to use any part of the original arrangement, and if I don’t then let’s not. On at least half the songs on this album, if you took my melody off, you would not recognize the song.”

Several songs on Groovin’ originated in the 1970s and ’80s, the decade that White considers his “cutoff point.” The Stevie Wonder track that follows “Groovin’” on the album is “Do I Do,” from 1982, and “Never Knew Love Like This Before,” originally recorded by Stephanie Mills, is also an ’80s-vintage track. “I Can See Clearly Now,” the classic reggae chart-topper by Johnny Nash, the Three Degrees’ Gamble and Huff-penned “When Will I See You Again” and “How Long,” the Paul Carrack-written hit by Ace, all stem from the first half of the ’70s. Once White narrowed down the material he wanted to include, he got to work on the arrangements. “You have to forget the original version,” he says. “I start with a beat and then I start playing the piano—most of these arrangements come from the piano.” Self-producing, White then worked out his guitar parts and fine-tuned the roles that the various musicians would play. Among them was drummer Ricky Lawson, a friend of White’s who passed away shortly after contributing to the album and to whom he dedicates Groovin’.

“A lot of the ideas on Groovin’ were left over from my last two cover songs albums,” White says. “I make song lists and go through them—‘Does this work? Does that work? Oh, that works.’ I had this list of songs and said, ‘Let’s see what happens.’”

In a way, “Let’s see what happens” has been White’s modus operandi since he first picked up a guitar. Influenced at first by folk music, he learned fingerstyle picking by listening to Simon and Garfunkel and Joni Mitchell recordings. An introduction to the revolutionary rock of Jimi Hendrix sent him scampering toward the electric guitar, but when his first model was destroyed in a fire he returned to the acoustic. He fell for the British blues of bands such as (early) Fleetwood Mac and was introduced to jazz by a friend. It was his ability to adapt his playing to multiple styles of music that got White noticed by British singer-songwriter Al Stewart—first as a pianist, then as a guitarist. White played on Stewart’s top 10 album Year of the Cat in 1976 and co-wrote the hit title track of the singer’s next album, “Time Passages.” White spent 20 years in all accompanying Stewart, and performed sideman duties for many other artists, but by 1990 he was ready to go out on his own.

“I was listening to the radio,” he recalls, “and they played a song I’d recorded with Al Stewart, ‘Ghostly Horses of the Plain,’ which was pretty much a guitar instrumental. The DJ comes on and says, ‘That was Al Stewart.’ I said, ‘No, that was me!’” From that point on, White began concentrating on his own music, composing and recording under his own name. His 1996 Caravan of Dreams album sold over 300,000 copies and by the early 2000s his shelf was bulging with awards for his virtuosic musicianship. “I never thought I’d be in the position of having a career playing my instrumental music,” White says. “When I started out, that wasn’t a road that was open to me. Then it worked.”

It’s still working. “I throw my net far and wide,” he says, “and don’t label it. It’s just instrumental music. I like to play nice songs on the guitar and I hope people like it.” Based on his stellar four-decade track record, and the instantly contagious grooves he’s created on Groovin’, that’s not going to be a problem.