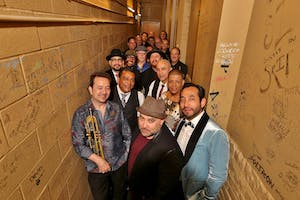 Celebrating the release of "THE III SIDE"

The Bay Area’s own 2014 Grammy® Award winning 20-piece Latin Big Band ‘Pacific Mambo Orchestra’ is celebrating its 10-Year Anniversary with the release of its 3rd album, entitled ‘The III Side.

PMO is directed by Mexican-born Pianist Christian Tumalan and German-born Trumpeter Steffen Kuehn, each one a highly skilled and experienced artist in their own right. The Orchestra’s instrumentation consists of 4 Trumpets, 4 Trombones, 5 Saxophones, Piano, Bass, Timbales, Congas, Bongos and 2 Lead Singers, the charismatic Christelle Durandy and Armando Cordoba.

PMO’s sizzling eponymous debut album won the 2014 Grammy® Award for ‘Best Tropical Latin Album’ and honors the sounds of the great Latin Big Bands of the 1940’s through 1960’s, including Machito, Tito Puente and Tito Rodriguez, while infusing them with an intoxicating new energy. Richly textured arrangements, crafted by some of the nation’s best arrangers, flow through the entire set of a PMO performance.

With a repertoire of mostly original scores, the selections move in a frenetic pace, pulsing with the sounds, rhythms and beats that only a true Big Band is capable of producing

Definitely a concert you do not want to miss!