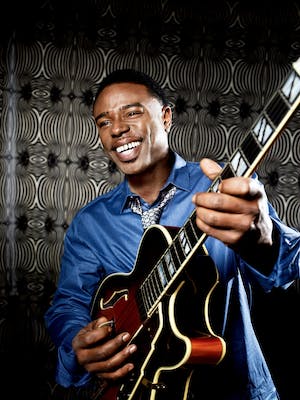 In the liner notes of Norman Brown’s exhilarating tenth solo album Let It Go, he speaks about the principals of Maat, the ancient Egyptian concept of truth, balance, order, harmony, morality and justice. These concepts of wisdom and knowledge inform Brown’s life and music. The highly sought-after Grammy®-winning guitarist, composer, singer and producer lays out the songs on Let It Go as his own truth and blueprint for self-realization and actualization. The guitar wizard’s manifesto is simple. He states, “My desire is for my fans to gain the spirit of joy, comfort, understanding and any hint of direction.”

When the iconic and pioneering guitarist George Benson sings your praises you know you are a bad man! Benson has heralded the consummate hit-maker, Norman Brown, as one of the greatest guitarists around today. Like Benson, Brown effortlessly fuses the finer elements of jazz, R&B, pop and blues to create his own insatiable and instantly identifiable and soulful sound. Brown declares, “My blending and crossing of styles happens organically by allowing the content to reveal its elements. There are only two kinds of music - ‘good and bad.” Brown has made a career of churning out the ‘good kind’ for over two decades. His unique elixir of urban contemporary jazz has allowed him to garner a devoted international following and an impressive career as a leader. He has also collaborated with the likes of Brian McKnight, Kirk Whalum, Miki Howard, Gerald Albright, Rick Braun, Dave Koz, Everette Harp and Chanté Moore, to name a few. Shanachie VP of Jazz A&R Danny Weiss says, “I'm thrilled to be working with Norman Brown. It has been my goal for years! Although comparisons with the great George Benson are obvious, Norman bring a special freshness and vitality that are unmatched. Really, no one comes close.”

Let It Go is a sonic canvas of 12 mostly original soul-stirring and thought-provoking compositions that celebrate the spiritual and personal journey within each of us. “This CD expresses a chapter of a spirit being’s journey in creation on earth as a man/woman. Through events, challenges and problems as well as the peaceful joys of happiness and love, these moments are our spiritual classroom!” Norman Brown fans will take delight in knowing that he showcases not only his sublime guitar playing but his simmering soulful vocals as well. Let It Go opens with the ethereal and majestic “Lessons of The Spirit,” which transitions into the breezy and melodious “It Keeps Coming Back.” Brown’s crisp, clean and bluesy riffs set the tone for a thrilling and revealing ride ahead. Dropping not only musical but universal laws of wisdom and understanding, Brown explains the message behind “It Keeps Coming Back.” “If we don’t learn and live by the Laws of the Spirit (Truth) then the myriad of problems that we face in our lives will return. It’s not a choice.” The album’s title track is a lovely R&B flavored ballad that shines a spotlight on Brown’s sailing agility, utterly gorgeous tone and impeccable phrasing. The intent of this song is simple as Brown explains, “Listen to the teacher within your spirit.” Let It Go also features Brown’s delightful reworking of the 1970s Five Stairsteps Top 40 Pop Hit “Ooh Child.”

“This is an all-time favorite of mine and sums up the thoughts that should dominate our minds especially in the face of obstacles and set backs,” says the guitarist. “In knowing that things will get brighter, that knowing becomes a force that aids us in the letting go process.” The track highlights Norman Brown along with TrayCar on vocals and keys who Norman Brown calls “a very special spirit.” TrayCar also mixed the entire CD.

Let It Go is also a family affair as Norman Brown, the father of six, shares the spotlight with his talented daughters, S.O.U.L. (Sister of Unbreakable Love). “They have all had the gift of music flowing in them,” says Brown of his vocalist/keyboardist daughters LaNika (a graduate of Musicians Institute of Hollywood), Rochella (a graduate of Berklee College of Music) and bassist/vocalist Kesha (a West Point Military Academy graduate). According to Brown “Conversations” is about the two voices we all have within us; our true self, conscious and spirit, verses the animal part of our spirit. “We must learn to control and distinguish the influence of each voice and the influence on our spirit,” he states. S.O.U.L is also featured on the funky and kinetic fountain of musical wonder “Living Out Your Destiny.” Norman Brown reunites with Chanté Moore for the sultry duet penned by James Poyser/Carvin Huggins/Troi Lauren, “Holding You.” Our spirit as well as our bodies have the desire to be held and to hold. It’s a faculty that follows the laws of truth. No one succeeds in life alone, it takes two or more,” shares the guitarist/vocalist. The brilliant “North Star” features Marion Meadows on soprano saxophone. The synergetic interplay between Brown and Meadows is a high point as the two radiate joy. Brown’s buttery guitar lines and smooth vocals caress the laid back fat groove of “Very Woman.” “When the one that you choose is all that! It’s very plain... Live out your destiny with them,” advises Brown. The ear-catching and soulful ditty “Liberated,” finds Norman Brown joining forces with his brothers in music and BWB members, trumpeter Rick Braun and saxophonist Kirk Whalum (who also guests on “Remember Who You Are”). Let It Go closes with a memorable cover of the Glenn Ballard/Siedah Garrett Michael Jackson hit produced by the King of Pop and Quincy Jones, “Man In the Mirror.” Brown is showcased on acoustic guitar and is joined by Sounds of Blackness for a emotive performance fitting for a close to a transformational journey.

Hailing from a musical family, Norman Brown was born in Shreveport, LA, and raised in Kansas City. Music was always playing in Brown’s house. His brother played guitar and a youngster Brown would sneak into his room in order to get his hands on his brother’s acoustic six string. Influenced early on by Jimi Hendrix and the Isley Brothers, it was not long before Brown was drawn in by one of his father’s favorite guitarists, Wes Montgomery. A graduate of the Musician’s Institute in North Hollywood, where Brown would go on to teach, the guitarist landed his first deal on Mojazz in 1992 where he recorded the albums Just Between Us, the Gold selling After The Storm and Better Days. Having recoded a string of successful albums including 1999’s Celebration (in which he teamed up with Paul Brown), 2002’s Just Chillin’ (featuring vocalists Michael McDonald, Miki Howard and Chanté Moore) scored a Grammy® win. The same year, Brown joined forces with saxophonist Kirk Whalum and trumpeter Rick Braun for BWB’s debut recording Groovin’. They also recorded the CDs Human Nature (2013) and BWB (2016). Brown continued a trail of critically heralded albums including West Coast Coolin’ (2004) Stay With Me (2007), Sending My Love (2010) and 24/7 with saxophonist Gerald Albright. Brown has sold over one million albums and continues to delight his devoted fanbase.

With the release of Let It Go, Norman Brown not only delivers an uplifting musical tribute to life but he reminds us of our own instinctive divine light. Brown also affirms that the innovation, virtuosity and musical vision that we fell in love with years ago is full throttle ahead He concludes, “Our being is two parts and the only way for success in life is through the proper balance of the two.” So sit back, listen, open your heart, mind and soul and Let It Go.