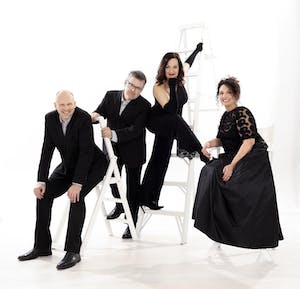 2017 marks the eve of New York Voices 30th Anniversary and they show no signs of slowing down. This critically acclaimed vocal group has refined their musical story to a high art. They are known for their close-knit voicings, inspired arrangements and unparalleled vocal blend. Their chameleon-like musicianship allows them to move seamlessly from setting to setting, be it orchestral/big band to the intimate trio lineup. The art of survival as a group in the music business is as much testimony of their success as their vocal finesse’. That, and say still coming to mind to the great creative forces out there that want to play with the vocal stacking idiom. They are first call from great arrangers and conductors like Bob Mintzer, Don Sebesky, Michael Abene, Keith Lockhart, and Rob Fisher who all know and admire the complexity of what they do and want something out of the ordinary when developing new projects. Like the great jazz vocal groups that have come before — Lambert, Hendricks and Ross, Singers Unlimited, and The Manhattan Transfer — they are firmly a part of that legacy and are dedicated to passing it on to generations to come.