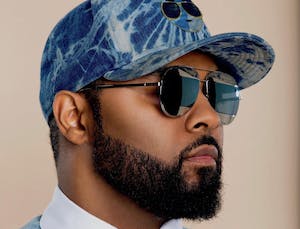 iCal
Google
Make sure to make your dinner reservations before the show!

It’s hard to imagine a performer working today with more heart and soul than Musiq Soulchild. With over a decade on the scene, the multiplatinum singer/songwriter brings a new depth to his meditations on life and love with his sixth studio album, Musiqinthemagiq. Could he be the hardest working man in the business? At the very least, he’s got to be the most soulful.

“Soul music is something that you can’t fake. You’re just expressing yourself. That’s the magic in my music.” —Musiq Soulchild

A lot has changed since Musiq first hit the scene. He’s no longer that talented cat from Philadelphia who just wants to sing. Since then, he’s made the shift from his native Philly, where he honed his skills among the city’s prolific music scene, to Atlanta. He’s gone platinum not once, but twice, and performed with everyone from Carlos Santana to Estelle and The Roots. As he readies the release of MusiqintheMagiq, he is eager to show fans another side, and perhaps let them in on the secret to his unforgettable blend of magic.

“I’m working hard to represent the legacy of soul music,” explains Musiq, who experiments with various shades of pop on the new album. He entered the studio wanting to “incorporate the sound of popular artists like Bruno Mars and B.o.B.” with the classic R&B magic that he does best. “I hope that people would recognize me as a bridge between the old skool stuff from back in the day to what’s going on nowadays. Even within my own catalogue, to recognize the progression.” Bringing together such talents as Swizz Beatz, who lends a verse on the single “Anything,” Jerry Wonder of Platinum Sounds, and Norwegian production team The Element, MusiqintheMagiq reveals an artist who is willing to surprise not just his audience, but also himself.

“I don’t like to just stick to one thing. None of the songs on the album sound like the song that comes before or after,” explains Musiq of the remarkably diverse collection on Magiq. The result is an eclectic blend of tracks that swerve from the New Jack Swing-influenced dancefloor burner “Anything” to the intimate/emotional ballad, “Yes.” “It kind of mimics life,” muses Musiq about the colorful collection. “When people listen to my album, I want them to feel like I’m taking them to different places.”

Musiq himself is also in a different place these days. He’s a bit wiser, sure, but he’s also in a committed relationship. It’s new territory for an artist who has explored many of the nuances of modern romance, from the friends-with-benefits arrangement laid out in “B.U.D.D.Y.” to the platonic-with-potential scenario delivered beautifully in “Just Friends.” Monogamy is hardly monotonous when explored by Musiq, however. “There are just so many things to consider when you are in an intimate, exclusive relationship with someone,” he says, noting that other artists haven’t really explored “the details and minutia of what it means to be in a real grown-up relationship with someone. When you really listen to the songs, they’re not about good things or bad things, they’re just about real things. I want to offer my experiences up to people.” He hopes that the songs are as therapeutic for the listener as they were to create.

Today, Musiq is eager to deliver his new blend of Magic to his audience. He looks forward to hitting the road on tour, as well as diving into new creative projects. “I’m excited about the album because it gives me a reason to connect with the people that have supported me for so long. Hopefully this project will open more doors for me professionally, creatively and personally, even.