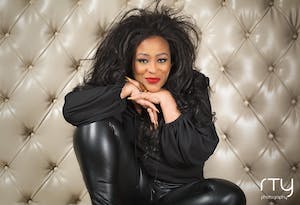 Miki Howard represents passionate vocal artistry wrapped in a diminutive package of beauty, sass and candor. Grammy-nominated Howard already has a stunning catalog of music wide ranging in style – from the breezy “Come Share My Love” and the steamy funk of “Ain’t Nobody Like You” to her soul-stirring signature “Love Under New Management,” the jazzy “Imagination” and the inferno that is “That’s What Love Is” (her duet with the late, great Gerald Levert). Miki has recorded eight albums but none quite like her new 7-song EP, I Choose to Be Happy from the Something Old, Something New, Something Borrowed, Something Blues Collection. She considers this CD of live and studio material the first in a forthcoming series of mini albums: Miki Howard Reality Music Record Series #1. The proud veteran states, “I’m making music for the soundtrack of the times we are living in now.”

The lead single is “Panther,” an affirmative declaration on the power of maturity and wisdom set to a raw Primal Funk of hand drum percussion, horns and chants co-produced by Miki with Jon Nettlesbey. In the lyric she proclaims, “I’m not a diva, I’m a Sacagawea,” name-checking the woman that assisted early America explorers Lewis & Clark. Miki shares, “You have to be a soldier for what you believe in. Some people get stuck in the trenches of adversity - a Panther soldiers through. In the music, I was going for a Kanye West kind a thing – a BIG sound that stands out on the radio.” With a sly smile she adds, “It’s also about the natural sexuality we women have between the rocking chair and the rocking cradle!” “Panther” is available in a remix featuring Oakland rapper Too $hort, a move that might surprise fans of the jazzy R&B queen…though it shouldn’t. “I did a lot of concerts early on with DJ Quik, Tone-Loc and N.W.A with Ice Cube and Eazy-E. I’ve known $hort since the early `90s and we’re still cool.”

In keeping with the concept of “Panther” is an intrigue-filled remake of “Soon I’ll Be Loving You Again,” a song from Marvin Gaye’s boudoir classic Motown LP I Want You (1976) that he co-wrote with living legend Leon Ware. Miki picked right up on its provocative lyric and shares it today from an evolved woman’s point of view. “Most men my age these days are married or this-n-that. So I tend to date younger men and find myself literally giving them knowledge. ‘Let me give you some head in terms of a heads up – some cerebral head of spiritual light.’”

Also revealing are “The Days of Wine and Roses” a reality version of a song about love at its best, the memories of pure love from our mom’s; and the emptiness one feels when it’s gone; and finally “I Choose To Be Happy” a mantra extracted from her signature “Love Under New Management” that Miki and her 16-piece band (under the direction of Japanese female Musical Director Noriko “Coko” Olling) recorded live at Hollywood’s Catalina Bar & Grill on Sunset Blvd. These songs are about as naked and soul baring as an artist dare to be before an audience. “Those songs were recorded on the fourth show of two nights, two shows a night. I was really hoarse but liked it so much that I left them. They are sincere and real.”

Miki was born Alicia Michelle Howard in Chicago, Illinois on September 30, 1960 - the daughter of gospel singers Clay Graham (Pilgrim Jubiliees) and Josephine Howard (Caravans). During her childhood in Chicago and Detroit, Miki met some of the best singers of the day. Early influences included family friends Dinah Washington and Aretha Franklin. Her first musical instrument was the harmonica her grandfather gave her. After her mother moved the family to Los Angeles, 15 year-old Miki received her first break when Augie Johnson, leader of the flashy vocal outfit Side Effect, spotted her in a beauty pageant and invited her to join his guys and gals group in `78. Also joining Crusaders trombonist Wayne Henderson’s At Home Productions, Miki sang backup for jazz greats Roy Ayers and Grover Washington, Jr., as well as Earth Wind & Fire’s Philip Bailey, Charlie Wilson and the Gap Band, among others.

Miki Howard was signed as a solo artist to Atlantic Records in the mid-`80s and recorded her first solo album, Come Share My Love, in 1986 featuring the R&B Top 5 title track and earning her a Soul Train Music Award for Best New Artist. Following 1988's Love Confessions (f/ "Baby Be Mine"), her third album, Miki Howard (1989), featured her first R&B #1 single "Ain't Nuthin' in the World" (penned and produced by Jon Nettlesbey & Terry Coffey). A move to Giant Records in 1991earned Miki her second R&B #1 with "Ain't Nobody Like You" from her CD Femme Fatale which also featured a smoky rendition of Billie Holiday’s "Good Morning Heartache."Casting director Robi Reed saw Miki perform Holiday tunes at Radio City Music Hall and offered her the chance to portray the legend in a nightclub scene for Spike Lee's 1992 epic, “Malcolm X.” In 2001, Miki recorded an album for Peak/Concord entitled Three Wishes receiving a Grammy nomination for Best Traditional R&B Recording.

Today, Miki Howard is the proud single mother of three: sons Nicholas (a Head Chef) and Brandon (an entertainer), and daughter Kaitlen (also an entertainer). The grandmother of four (nickname: “G-Ma”) has also been profiled on the popular Black Music documentary TV series “Unsung.” Miki confidently reports, “In this internet age, your phone is your radio. And I found my life with social networking. It’s like sitting at a round table with people from all over the world. So don’t call this a ‘comeback!’ Welcome to Miki’s Forward March.”