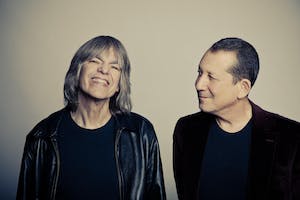 GRAMMY Award-winning keyboardist/composer/producer Jeff Lorber recalls seeing guitarist Mike Stern during his much-ballyhooed tenure with Miles Davis in the early ‘80s. “I’ve been a fan of his for a long time,” said the keyboardist, who was touring hard in support of his hit records Wizard Island and It’s a Fact in those analog days. “Jeff Lorber Fusion and Miles Davis were playing some of the same festivals back then, so I got to hear him play.” For his part, Stern offered, “To be honest, I was aware of him, and had heard a bunch of good things, but I had never really checked him out. We were just in different orbits, me and Jeff.”

In subsequent years, each staked out his respective musical territory — Lorber, the electric maestro from Los Angeles, pioneering the post-fusion sound of contemporary jazz with his radio-friendly, groove-oriented instrumental music; Stern, the esteemed six-stringer from New York, lending his considerable chops to bands led by Jaco Pastorius, Michael Brecker and Joe Henderson as well as groups like Steps Ahead, Vital Information and the Brecker Brothers while also leading his own band and cutting 18 recordings under his own name.

Credit bassist-producer Jimmy Haslip, a charter member of Yellowjackets, with bringing these two seemingly disparate musical forces from opposite sides of the country together. And rather than being a musical Odd Couple, it turns out that Lorber and Stern fit hand-in-glove on the ten scintillating tracks that comprise Eleven, set for release on September 27, 2019 via Concord Jazz. (The title is a joking reference to This Is Spinal Tap’s Nigel Tufnel, who proudly demonstrates in the 1984 movie how his amplifier has a volume knob that goes to eleven… “for when you need that extra push over the cliff.”)

Haslip was already well acquainted with Stern’s playing, having recruited him for the Yellowjacket’s 2008 album, Lifecycle, and follow up two-year tour. The bassist had also cultivated a longstanding musical relationship with Lorber, having played on and co-produced six of the keyboardist’s previous albums — 2010’s Now Is the Time, 2011’s Galaxy, 2013’s Hacienda, 2015’s Step It Up, 2017’s Grammy-winning Prototype and 2018’s Impact. Sensing a natural blend between the two, Haslip proposed the collaboration. “Jeff and Mike both admired each other’s musicianship and talent,” he said. “As far as my conception for this collaboration, I thought working together would create something new and different, which was compelling to me.”

“I was definitely very enthusiastic about it because I knew it would be something different and challenging,” added Lorber. “And I liked the idea that it would take me away from what some people call ‘smooth jazz,’ which is a moniker that I don’t really love. Because Mike is not that at all. He’s a lot jazzier in terms of his phrasing. He’s just a bebop wizard, he’s got an incredible jazz feeling. And by the same token, he’s got the rock and blues thing covered too. He’s on both sides of the musical spectrum. So when I heard he was up for it, I was delighted to have a chance to work with him in the studio on this project. And I think we really hit it off musically as well as personally.”

Said Stern of his main collaborator on Eleven, “When the idea was floated for this project, I asked a bunch of cats who worked with Jeff, like Randy Brecker, Dave Weckl and Bob Franceschini, and they all said, ‘He’s cool, he throws down, he can really get it going.’ And they’re right. Jeff’s got a strong rhythmic groove and he comps and plays beautifully on acoustic piano, Fender Rhodes, and organ. He’s got an especially beautiful touch on the acoustic piano, and I know that he studied with Madame Charloff, an amazingly great teacher in Boston. And I feel like his music really comes more from soul music than smooth jazz. That Philly soul thing is definitely in some of his tunes on this record.”

As for the stigma attached to so-called ‘smooth jazz’, Lorber believes that was more a marketing term than a musical category. “I was doing my music way before there was the term ‘smooth jazz.” he said. “I guess the Venn diagram of my music intersects with some of those characteristics of smooth jazz, but my music has always been melodic, it’s always been funky and I definitely try to keep an attention to soloing. It represents something more ambitious, more jazzy and more compelling, I hope.”

While Stern and Lorber may differ in their approaches in the studio, they found common ground on Eleven. “I like the raw, rough edges of recording live in the studio,” the guitarist maintained. “Jeff does it a different way, and he does it really well. He’s kind of amazing at the kind of more produced, almost pop approach to making a record. There’s a certain kind of clarity to that process that I admire. It’s just a different way of conceptualizing it.” Added the prolific composer-producer, “Mike just loves to play live and his thing builds around that, so we just picked some of his favorite tunes to play live. I wanted to kind of reinvent them and reimagine them, so hopefully we were able to step up and do that. What we did was try to add a modern touch by doing more layering, like with some of the overdubbed horn arrangements that David Mann provided on several tunes. And I think Mike was pretty happy with how they turned out.”

The result is an extremely copacetic session that is a far cry from smooth jazz. There’s too much harmonic meat and aggressive soloing from track to track to fit comfortably in that marketing category. Instead, both Lorber and Stern throw down with a vengeance on Eleven. From the melodic and catchy opener, “Righteous,” powered by Gary Novak’s crisp backbeat, Lorber’s signature Fender Rhodes playing and Dave Mann’s tight, East Coast/Brecker Brothers-ish horn arrangement, to Stern’s lyrical, African flavored “Nu Som” and his tender ballad “Tell Me,” to nasty, blues-drenched jams like “Jones Street” and “Slow Change,” this summit meeting percolates with insistent grooves and pulsates with energy and ideas. Stern’s runaway romp “Ha Ha Hotel,” fueled by drummer Dave Weckl’s muscular backbeat and punctuated by Mann’s crisp horn pads, has the guitarist unleashing his fabled ‘chops of doom’ before Lorber erupts on a killing organ solo. Lorber’s ultra-funky “Motor City” and “Big Town” add a swagger to the proceedings. The driving Lorber-Haslip number “Rhumba Pagan,” fueled by drummer Vinnie Colaiuta, features a choir of wordless vocals from Stern, Haslip and Chelsea Maull while Lorber’s intricate 6/8 closer “Runner,” has the keyboardist soloing tastefully on piano and the guitarist cranking his axe to Eleven.

“This project was a joy to work on for many reasons, but I most enjoyed the collaborative effort in this work with Jeff and Mike,” said Haslip. “For me, as a co-producer, it was the kind of creative and experimental experience I look forward to. We did try to shake it up, and I think we really succeeded.”

Meanwhile, both Stern and Lorber and looking forward to opening up this material on their upcoming tour together. “The way I’m conceiving this is we’re going to stretch a lot live with much longer solos,” said Stern. “Hell, we’ll probably play two tunes the whole set.” Following their European tour in November, Lorber and Stern will commence their swing through the States in late Fall, beginning with a run at Blues Alley in Washington D.C. Sept. 26-29, then Jazz Alley in Seattle Dec. 3-4, Catalina Jazz Club in Los Angeles Dec. 5-8, Yoshi’s in Oakland Dec. 9-10, the Dosey Doe in The Woodlands, TX on Dec. 14, One World Theater in Austin, TX on Dec. 15 and culminating in a run at Iridium in New York Dec. 16-19.