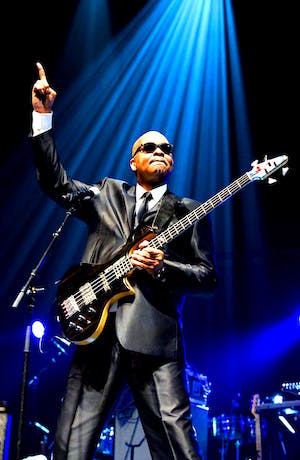 In his autobiography “DIVIDED SOUL,” Marvin Gaye writes, “I have to win my audiences back from Teddy Pendegrass, Peabo Bryson, and MICHAEL HENDERSON! HE'S HAD SINGLES SCORE TOP 10 ON POP & R&B CHARTS..

How many artists can say that they've reached the zenith of success in a multitude of genres? Jazz! Funk! R&B! Soul! Drum & Bass! Fusion! MICHAEL HENDERSON has and does!!!

Though we are very excited to announce that his latest "BASS" work on the "Miles From India" disc has received a Grammy Nomination, and congratulations are definitely in order, for this consummate artist, this is not the first Grammy Nomination, but his fourth!

Having written, sang, and played bass on Phyllis Hymans' first top ten hit, "We Both Need Each Other", Michael Henderson went on to record with Ms. Hyman the classic, "Can't We Fall In Love Again", considered today to be one of the top ten duets of all time! His taste for singing duets only heightened with the sultry vocals of Roberta Flack on the also, Henderson penned hit, "At the Concert", additional chart-toppers would include the Michael Henderson penned, "Valentine Love" a classic lovers' anthem featuring the sassy, jazzy vocals of Jean Carn. Let us not forget, the soulful single, "Take Me, I'm Yours" featuring the steaming highs of Ms. Rena Scott!

Michael Henderson first gained worldwide recognition as an acclaimed young bass player with groups such as "The Detroit Emeralds", "The Fantastic Four", "The Funk Brothers" and was the FUNK anchor for Stevie Wonder, at the tender age of 16! Musicians marveled at his prowess and knowledge of his instrument. Audiences included the likes of Mick Jagger, Dr. John, Diana Ross, Betty Davis, Miles Davis and more. After one such extraordinary, truly inspiring Stevie Wonder concert, Legendary Trumpeter Miles Davis made his way backstage only to inform Stevie, "I'm Takin' Yo F@&(*(%@ Bass Player!" With Miles, a new style of playing was developed, “FUSION”...

Bass players the world over wanted to know this person that helped alter the way music is played and listened to!!! The rest is history!

Michael Henderson toured the world from 1970 - 1975 in what is/was known as "The Electric Era" with Miles Davis, and recorded on more than 50 Miles Davis Albums! While recording with Miles Davis, Henderson played bass on the following chart-toppers; "You're The Man," with singer Marvin Gaye, the album/single "Whatcha See is Whatcha Get!" and "In The Rain" both by Super-Group, "The Dramatics".

Michael Henderson traveled the world incessantly with Miles, until he (Michael Henderson) decided to write, sing and record his first hit, "Valentine Love" on the Norman Connors album, "Saturday Night Special" featuring the smooth vocals of Michael Henderson and Jean Carn! Following this hit release was the super phenomenal, oft recorded, "You Are My Starship" from the Norman Connors Album of the same name, "You Are My Starship". Though it is often times thought that Norman Connors is the vocalist, it is actually the vocal stylings, of Michael Henderson, also Bassist, Composer, Arranger and Producer of this classic! He then went on to record several albums which garnered many top ten hit singles!! Those albums are, "In The Night-Time", "Wide Receiver", "Solid", "Goin' Places", "Do It All", Sling Shot", "Bedtime Stories", and "Fickle". As Mr. Henderson's star continued to rocket as a solo artist, as well as a session player on many chart-topping recordings, Hollywood beckoned, and Henderson found time to also contribute recordings with his signature voice to Hollywood Motion Picture Soundtracks, ie., “ABOUT LAST NIGHT” starring actors DEMI MOORE, ROB LOWE, JIM BELUSHI, ELIZABETH PERKINS and the comedy, “ARMED and DANGEROUS” starring the comedic talents of actors' JOHN CANDY and MEG RYAN!

Having garnered success in many musical genres', (literally changing the direction of Jazz with Miles Davis) Henderson is proud recipient of the prestigious “Jazz At Drew Award” given by highly esteemed Charles R. Drew University of Medicine and Science, LEGACY MUSIC SERIES, has been inducted as “Jazz At Drew Ambassador of Music,” proudly serves on The Ellington Advisory Council for The Duke Ellington School of The Arts, Washington DC., has numerous GOLD/PLATINUM Award Plaques, and keys to many of our nation's' cities! In addition, for past and continued contribution(s) to music, September marked the month of a "Black Tie Gala" Philadelphia, The City of Brotherly Love where he received the prestigious "LIFETIME ACHIEVEMENT AWARD of MERIT" from President/CEO of the esteemed group, "The National R&B Music Society Inc.!"

Currently, Michael Henderson's artistry can be heard on the newly released MARVIN GAYE "WHAT'S GOING ON" 40TH ANNIVERSARY 2 CD/LP SUPER DELUXE EDITION, in which MICHAEL HENDERSON plays bass guitar, and is co-author on many of the compositions!

Busy recording his newest effort, Michael Henderson states that “fans can look forward to the release of a NEW (PRE-ORDERS TAKEN NOW) 2 qty CD set, “TAKE ME, I’M YOURS - THE BUDDAH YEARS ANTHOLOGY” which includes all of Michael’s fifteen US charted singles including the Top 5 R&B hit ‘Take Me I’m Yours’ and the 1981 hit duet with Phyllis Hyman, ‘Can’t We Fall In Love Again’ as well as key LP cuts such as the quiet storm gem, ‘At The Concert’ with Roberta Flack and ‘Treat Me Like A Man’ (which Michael also produced for The Dramatics). This newest release (scheduled for release to the general public, Feb 2018) is a solid retrospective of award-winning recording artist, producer, songwriter and musician Michael Henderson’s hit-filled tenure (1976-1983) with Buddah Records.