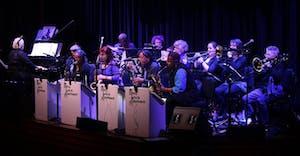 “…This fantastic 13-piece band… [with] their enthralling book of tunes and arrangements by Melba Liston and Mary Lou Williams…delivers showstoppers with ease.” — Andy Gilbert, jazz journalist

For their YOSHIs’ debut, Mary Lou’s Apartment will light up the night in celebration of International Women’s Day and Women’s History Month, reflecting Williams’ roots in the black aesthetic that created and developed jazz. They’ll also present work by Williams’ younger colleague, Melba Liston, whose music is steeped in pan-African sensibilities, poetic luminescence and a deep and abiding swing. Mary Lou’s Apartment has been steadily building audiences and excitement with appearances throughout the Bay Area, and their scene at YOSHIs is one not to be missed!

Mary Lou’s Apartment presents compositions and arrangements that have been overlooked - music that’s endlessly contemporary and soulful. Calling on the model of its namesakes, Mary Lou’s Apartment throws open a wide net of influences and collaborators, just like the steady flow of musical guests Mary Lou Williams drew to her home at 63 Hamilton Terrace in Harlem.

Come on over to the Apartment!