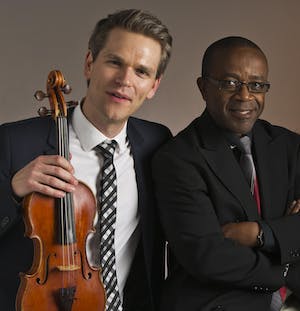 Mads Tolling is a two-time Grammy Award-winning violinist, and he is the 2016 winner of the DownBeat Critics Poll Rising Star Violin Award. Mads is a former longtime member of Stanley Clarke’s Band and the Turtle Island Quartet. He has been featured on NPR’s Morning Edition, and he has performed over a thousand concerts worldwide, including the Library of Congress and the Newport Jazz Festival. Mads has appeared with Chick Corea, Ramsey Lewis, Kenny Barron, Paquito D’Rivera and Jean-Luc Ponty.

Mads released his hit recording, Mads Tolling & The Mads Men - Playing the 60s in 2017, and he has been touring the show worldwide ever since. The album has been a favorite amongst fans and critics alike and was in the top 30 on US Jazz Radio for two straight months, peaking at #5. Mads takes us back to the 1960s serving up fun-filled nostalgia, new arrangements of familiar tunes and fresh takes on jazz standards and the not-so-standard, pushing the boundaries of where a violin can do. Repertoire ranges from “Good Vibrations” and “Meet the Flintstones” to “Georgia on My Mind,” “A Taste of Honey” and “All Along the Watchtower.”

Playing the 60s features several guest vocalists, including the Bay Area’s own Kenny Washington. Mads and Kenny collaborated for the first time at Yoshi’s in 2016, and the two have since performed at Kuumbwa Jazz in Santa Cruz and at Stanford Live. The San Francisco Chronicle dubbed Kenny “The Superman of the Bay Area jazz scene.” He is a frequent performer with Wynton Marsalis at the Lincoln Jazz Center in NYC.

In looks, Kim exudes the aura of a diva from a by-gone era. Vocally she has pipes to burn packing a 3 ½ octave range that can go from operatic to gritty blues on a dime, projection that can whisper a ballad yet is capable of filling a room with no microphone, and the ability to scat blistering solos without ever losing the crowd’s interest or the intense swing. Kim won the Bay Area’s “Best Jazz Group” in 2013. Kim and Mads first played together six years ago at Yoshi’s San Francisco, so tonight’s performance will be a joyous reunion.

Joining Mads, Kim and Kenny this evening are The Mads Men with Colin Hogan on keys, Daniel Lucca Parenti on bass and Eric Garland on drums.

“A wonderful new voice on the violin - very refreshing!”

“The Thing is, Washington slays ‘em wherever he performs.”