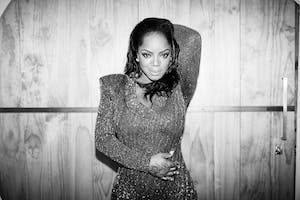 Due to concern for public safety and the recent announcement by Governor Gavin Newsom/Alameda County regarding public gatherings, the Leela James at Yoshi’s scheduled for April 10, 2020 is postponed. Although this is a tough decision, the health and well-being of our patrons/staff/artists will always be our top priority. All tickets purchased for the postponed concert will be honored on a new date that will be announced shortly.

What sets the acclaimed R&B and soul singer-songwriter, Leela James apart is her fearless approach to music. “The best artists stay true to who they are, no matter the scale,” she believes. These values have allowed Leela to remain a consistent figure in R&B with a discography of quality soul music spanning over a decade long. Leela’s music is a constant reminder of what it is to be human – to love, to regret and to dream. Leela’s successful career first began when she burst onto the scene in 2006 with her debut album, "A Change is Gonna Come". She has since topped Billboard charts, had her music featured on the ABC hit show, “Dancing with the Stars,” and starred on the TV One’s “ R&B Divas: Los Angeles.” Leela’s talent is undeniable among her peers in the industry and her music continues to resonate with core fans today. She has collaborated with the best producers, toured alongside Maxwell and Ledisi, and earned countless spots on the Billboard charts, including a #1 spot on the Urban Adult Contemporary charts with the hit single, “Don’t Want You Back,” from her latest album “Did It For Love.” Leela’s classic albums have also earned nominations for Outstanding New Artist at the NAACP Image Awards, and Best R&B/Soul or Rap New Artist at the 2008 Soul Train Music Awards. The soul singer has always had a natural ability to communicate a mixture of emotions with the husky and bluesy tone of her voice and was nicknamed “Baby Etta,” after Etta James, growing up as a child in Los Angeles. In 2012 she released, Loving You More...In the Spirit of Etta James, an album in homage to her idol. Leela’s other musical influences range from soul to funk, and jazz, including legends like Chaka Khan and Al Green. Leela has successfully toured 3 times last year in 2017, including the “Undeniable” tour with Daley, "SUMMERS17" with Maxwell and Ledisi, as well as the "Savage x The Soul Tour" with Tank. The songstress continues to rock crowds performing an array of classics and new hits, including the latest single, “All Over Again.” When she is not touring, Leela resides with her family in Houston, TX.