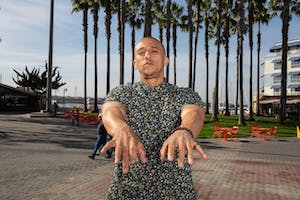 Oakland based pianist, M.C., producer, and composer is a classically trained pianist, who studied and immersed himself in jazz, and is a dedicated and prolific hip hop M.C. and lyricist. Choice delivers a distinct sound, style, and approach, blending genres together seamlessly with his witty and conscious lyrics, masterful piano flourish, and his rich hip hop jazz compositions.

After starting piano lessons at the age of 11 at Oakland’s Westlake Junior High School, Kev’s talents and passion for music were recognized and he was recommended to UC Berkeley’s Young Musician’s Program. He continued on to play at Skyline High School and eventually earned degrees from Xavier University of Louisiana and Southern Illinois University at Carbondale, bachelors and Masters in Piano Performance, respectively.

Kev Choice has toured around the world with artist such as Michael Franti and Spearhead, Goapele, Too Short, Zion I, LyricsBorn, The Coup, and Lauryn Hill. He has also written and composed an orchestral piece, “Soul Restoration Suite”, performed by Oakland Symphony, and produced on tracks with hip-hop artist like Too Short and Wiz Khalifa. Having formed his own band, Kev Choice Ensemble in 2008, Kev has played at venues and festivla locally, across the state, and as an opener around the world. He’s opened for the likes of Yasiin Bey, Talib Kweli, Digable Planets, The Coup, and Lauryn Hill.

Kev Choice latest project will explore the piano trio format in a fresh and dynamic way, featuring Kev on piano and vocals performing original music and covers of Classic Jazz, Soul, and Hip-Hop works with the help of some very special guest.

"Black London": Is a new band and collective of Bay Area musicians, artist, and band-leaders, feat. Kev Choice, Mike Blankenship Howard Wiley, pushing excellence, preservation, and progression of black music and culture through performance, recordings, and collaboration. For their first endeavor, they have come together to pay homage to the classic D’Angelo album “Voodoo”, 20 years after its release. This albums blend of funk, soul, hip-hop, and jazz, was a big influence on each individual and on the music of their time.

Choice and Wiley meet as pre-teenagers at UC Berkeley’s Young Musician’s Program, and later met Blankenship as he became an in-demand player on the Bay Area music scene. They built a special bond in 2007 as members of Ms. Lauryn Hill’s band that Choice was musical director of and each played an integral role in they band as they toured over 15 countries in a year time span. They have collaborating on projects and performances ever since. All 3 have established themselves as band leaders in the Bay Area, Blankenship with “Spooky Fox”, Wiley with “Extra Nappy” and Choice with “Kev Choice Ensemble”. Each has also released individual projects that have solidified their careers, Choice with 4 albums including the acclaimed “Oakland Riviera” and his instrumental project “88 Steps To Eternity, Blankenship with his “Living For The Future, and Wiley with his “The Angola Project”.

This show will feature music from the Voodoo album arranged and produced by the 3 musicians and feature an all-star band of musicians and guest artist.