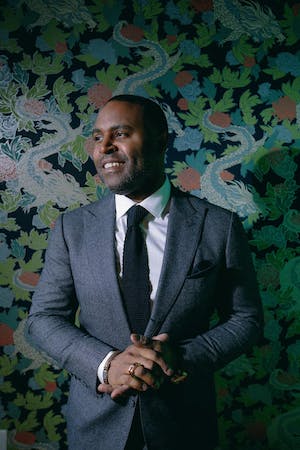 “Kendrick is not just a timekeeper, he is a musician with big ears and a great imagination.”

“Kendrick Scott has become the Art Blakey and Elvin Jones of his generation,” says the renowned trumpeter and bandleader Terence Blanchard of his longtime drummer who makes his own Blue Note debut with the release of a remarkable new album, We Are The Drum. “He’s a brilliant mind bringing innovation to the music at the same time as creating a safe place for young talent to develop and grow.”

That kind of musical apprenticeship is key to the development of young jazz artists as Blanchard well knows having himself spent pivotal years with Art Blakey’s Jazz Messengers. In the decade that Scott occupied the drum throne in Blanchard’s band, he had the opportunity to learn first-hand from an established master who gave Scott the space to find his own voice both on his instrument and as a composer. In turn, Scott took that experience and founded one of the premiere new ensembles in jazz: Kendrick Scott Oracle.

Scott originally formed Oracle in 2006, and the band currently features a top notch collective of young musicians capable of a wide range of musical expression: saxophonist John Ellis, keyboardist Taylor Eigsti, guitarist Mike Moreno, and bassist Joe Sanders. With We Are The Drum, Scott becomes the fourth alumni of Blanchard’s band to sign to Blue Note as a solo artist following in the footsteps of other leading voices of his generation including guitarist Lionel Loueke, pianist Aaron Parks, and bassist Derrick Hodge who produced the album.

Although the session is led by the drummer, Scott makes clear that “it's not a percussion centered recording. Everybody is invested in it in a different way. Everybody contributed. The accent is on ‘we’ in the title. There is a sense of community in how it was created and how we work together. There is a lot of space for each player to have their say.”

Indeed each of Oracle’s members has a songwriting credit on We Are The Drum, including six compelling new originals by Scott. The 11-track album also includes a cover of the Flying Lotus song “Never Catch Me” as well as a feature spot for the vocalist Lizz Wright who co-wrote “This Song In Me” with Hodge.

The new album kicks off with “We Are The Drum,” which was co-written by the band. “It's about each of us realizing one person’s power to make a difference in the world in which we live,” says Scott, adding that “it actually began as a chant.” The tune builds in swirls of sound, releasing the tension to make way for a spacious solo from Ellis on tenor saxophone before coming to its climax. “John Ellis' range is amazing,” says Scott. “He’s extremely soulful and modern.”

Ellis’ “Make Believe” follows with a dreamy wash of melody, Ellis’ soprano saxophone lines leading the way before eventually intertwining with Moreno’s guitar. The track flows beautifully into “This Song In Me,” on which Wright has never sounded better. “Lizz’s sound is so organic and possesses a powerful transparency. I have long loved Lizz's voice and was quite thrilled to have her contribute to this project.”

“‘Mantra’ is an old piece of mine we've been playing a while,” explains Scott, adding that the tune “has evolved over the years. It's much more expansive. As Wayne Shorter told me, ‘anything you write is always in progress.’”

“I was watching a documentary on Charles Lloyd” says Scott as he explains the genesis of his ruminative tune “The Long Shadow.” “He said ‘the closer you go to the light, the longer your shadow grows.’ This is the long shadow of racial history. The drum signifies footsteps in a marching formation. The shadows are things in our wake that we can't change.”

“Never Catch Me” is an intricate reinterpretation of a song by Flying Lotus which originally featured the rapper Kendrick Lamar. “It's a transcription of Lamar’s rap, it traces the flow and rhythm,” says Scott. “Raps are an extension of what we do as drummers. So the melody was composed in the essence of the rap, with different pitches. A kind of a search for a new form.”

Maya Angelou's poem “Touched By An Angel” is the inspiration for a Scott original of the same name, which appears here in two different versions. Dedicated to the writer, the performances are delicate and thoughtful. Scott says “it's about how isolation makes us lonely. We can only be happy in the company of other people. A reminder that ‘we’ are the drum, not just ‘me.’”

Ellis’ memorable tune “Milton” is a tribute to the great Brazilian musician Milton Nascimento. “There are so many textures in this band. Each textural choice is different,” explains Scott. Here a delicate keyboard and guitar intro leads into a passionate main theme played on arco bass by Sanders before the piano and guitar return with an insistent rhythmic figure that pushes the tune forward. “Milton Nascimento's music is deeply connected in a spiritual way,” says Scott “There is not a full release to the song, but a lot of tension in a cyclical way.”

Moreno's dreamlike “Lotus” is, in Scott's words, “more textural than anything. The lotus plant seeds and blossoms at the same time, a beautiful synchrony.” Over a bed of bass, bass clarinet and acoustic guitar, the song enters and exits on a soft breath.

“’Synchrony’ is a tribute to the 1960's Miles Davis quintet, one of my favorite bands" says Scott. “The melody is shadowed, it's kind of there and not there.” The performance cooks on a propulsive rhythm set by Kendrick's driving drums and Sanders' walking bass and features a searching guitar solo from Moreno.

The closer is a solo piano version of “Touched By An Angel” performed by Eigsti that Scott describes as “a breath of fresh air. He plays with plenty of space and adds a celestial element that allows the album to end on a still note.”