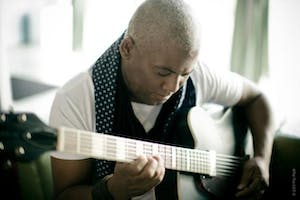 "I can see clearly now the rain is gone…"

Amidst a new album bursting with hope, joy, romance and inspiration, including eleven songs penned or co-penned by the artist, it's the Johnny Nash cover "I Can See Clearly Now" that Jonathan Butler elected to record on the So Strong album, his 15th solo collection, that speaks volumes about his outlook after a tumultuous year wrought with immense personal loss, pain and suffering. Butler's tenacious, indomitable spirit and effervescent view of silver-lined clouds infuses his music like a heaven-sent harbinger of healing.

"Music is spiritual and it heals. It soothes the heart and mind," states Butler, who was born in Cape Town, South Africa. In the past year, his mother passed away, he lost one of his closest friends (Wayman Tisdale), and he supported his wife (Barenese) in her battle against cancer. "Sometimes it's better not to tell people what you're going through (while you're going through it), but tell them after you've come through."

Thus So Strong was born. For the singer-guitarist-songwriter-producer known for achieving chart-topping success, Grammy nominations and other accolades for his R&B, contemporary jazz, adult pop and gospel recordings, it's his first urban record in quite some time. Rather than wallow in despair, as per usual the album finds Butler celebrating life and serving as a brilliant beacon of divine light.

"You can't keep your head down all the time. You have to celebrate. With all that's presently going on in the world, I felt the need to give something to the fans, to offer hope. I had to get to that fun place again. The album is a departure; it's optimistic and positive. It's get up-and-dance, and feel good. It's all about just letting go. It's about fun with flavor and a lot of feeling. I call it the three Fs: fun, flavor and feeling," Butler chuckles. "I come from the urban world and this home-brewed album showcases my freedom to do what comes naturally (to me). It's easy to listen to. The songs reflect my romantic side, my passionate side and my fun side."

Butler, who produced and arranged the album, played most of the instruments, including guitars, bass and keyboards. He brought in a few noted horn men – Rick Braun, Dave Koz and Michael Lington – to add heat and drummer Gordon Campbell to lay down beats to a number of tracks. Butler's daughters Randy and Jodie sing background vocals.

Opening with a high-energy, syncopated disco beat the vocal cut "So Strong" is an unabashed throwback textured with vibrant strings and jazzy electric guitar riffs. It's the first Urban Adult Contemporary radio single.

In the spirit of a Bill Withers tune, "You've Got To Believe In Something" finds Butler crooning from the pulpit on this inspirational affirmation. Adding reassurance is a gospel choir on the chorus and a warmly enveloping horn section comprised of trumpeter Braun and saxophonist Lington. "This song came to me while reading scriptures. We're often lost in our struggles, but you've got to keep going and think about the positive side," conveys Butler.

Saxman Koz named and played on the instrumental "Make Room For Me," the first single at smooth jazz radio. The percussion-filled Latin rhythm sets the stage for Butler to "solo like I've never soloed before" on an electric jazz guitar.

One of Butler's favorite songs on the album, the mid-tempo "Factual" is a bit mysterious, a little romantic and a hint of sexy. He explains the Urban Adult Contemporary groove as being "me expressing my freedom and liberty. As with anything I do, it's got a spiritual thread woven throughout. It wouldn't be me if that (spiritual thread) wasn't present."

According to Butler, "Feels So Good" is a pure, happy love song. While Butler plays an electric jazz guitar, Braun blows a muted trumpet that creates a nighttime vibe. "It's a song of optimism. It's a prime example of the record being about letting go and letting God lead the way," reveals Butler. "The recession has people all over the world hurting and struggling, but we shouldn't get bogged down by the negativity. If we pray, God will answer. Think about it. After you've seen God come through a million times, you then have to just surrender and let go."

An urban slow jam, "Be Here With You" is a duet between Butler and Angie Stone that has the timeless, retro feel of a classic R&B record. The chorus shimmers with bells reminiscent of Burt Bacharach's work and Lington pours on the amour with a pleading sax solo. About the song lyrically, Butler says, "Perspective takes on greater meaning with age and wisdom."

Aiming to capture the sounds of the early 1980's when artists like George Benson set the standard, Butler used an electric guitar for the instrumental "Avia/For My Baby," which has a Brazilian cha-cha feel. "It felt so different using a (electric) jazz guitar on an instrumental. I've become known for using nylon or acoustic guitars on these type of songs, but I wanted to go back to the era that has influenced my music so strongly. The compositions then were romantic and had great instrumentation.

"The song is about my granddaughter, Avia. She is the love of my life. I am in such awe (of her). She is such a blessing in our lives. No matter what else maybe going on, she just keeps us going," says the first-time grandfather who is still in his 40s.

"I'm Right Here" is one of six songs Butler wrote and recorded with Kurt Lykes. "Kurt is like a member of the family. We met through church and he's like another son. He's always here with us. He's a really close friend and a very talented writer and musician." The ballad is a confirmation, a pledge of love and security. "It's another one of those old school R&B songs that you used to play in your basement when you were begging," Butler explains with a laugh.

The chill verse explodes into a soul-stirring chorus on "Color Green." On the track, Butler's electric guitar shadows his voice. "Jill Scott inspired this song. It follows the neo soul way of flipping your thoughts and feelings," describes Butler. "Green is my favorite color, but it's not about money. It's about God. Green is earthy and natural."

"Good Times" is another early 1980's-influenced slick and sophisticated instrumental on which "I let the guitar do the talking." On the laid back groove animated by Braun's horns, Butler scats note for note while noodling on an elegant electric jazz guitar.

Butler opts for a slower, deliberate tempo on his version of "I Can See Clearly Now." He turns the vintage song into a sunny spiritual with the help of a gospel choir chorus. "This track is what I'm all about musically. It's gospel meets jazz meets R&B. It's spirituality meets the soul," Butler reflects. "The song is a confirmation that seasons will change. We need to stand together in faith and prayer in spite of the numerous challenges we face."

The album closes with "I Pay Respect," which is as gentle as the setting sun. Koz reappears on sax and Butler's emotive acoustic fretwork vividly conveys a poetic homage to his homeland. Butler declares, "This song is reminiscent of Nelson Mandela. It's reminiscent of Desmond Tutu. It's reminiscent of Miriam Makeba. It's J.B. going home to my African roots. I'm paying respect to my country, to the people who influenced me, and to my faith.

"Take the lyric in Bob Marley's 'No Woman, No Cry': 'In this great future, you can not forget your past.' You go back to your roots. I'm South African first. I need to make that connection and take people on that journey. It wouldn't be fair to do it otherwise; it wouldn't have the same meaning either."

Butler grew up in the townships of South Africa, the youngest of 12 children. He started singing and playing guitar at age seven. Even before he reached age ten, he traveled cross-country performing in villages with a 100-member troupe making money to help support his family. The audiences would vary from poverty-ravaged black townships to opulent halls open only to whites. Traveling accommodations were dismal and atrocious. In his travels, the young entertainer could neither comprehend the extreme destitute nor the harsh treatment he endured and bared witness to under the reign of Apartheid. Afrikaans was his native tongue, but he learned English in his travels.

After signing his first record deal as a teenager with British record producer Clive Caulder's Jive Records, Butler's premier single became the first by a black artist to be played on white radio stations in South Africa. The single won a Sarie Award, which is the South African equivalent to a Grammy award. Butler called England home for 17 years. His self-titled debut album put him on the map internationally and garnered two Grammy nominations: one for the R&B-pop vocal statement "Lies" and the other for a poignant instrumental, "Going Home."

Butler's albums and worldwide concert tours have afforded him fame and a lifestyle far from what he ever could have imagined as a child performer, but more importantly, it brought him the freedom to follow his passion – music – on his own terms. Residing with his family in the verdant hills of Southern California for more than a decade, an area that he says reminds him of his homeland, Butler remains humble and grateful.

"Our struggles shape and define us. Growing up under Apartheid helped fashion me into the man I am today. I'm here to serve; I'm willing to serve at a moment's notice. I feel blessed to be in the (music) business this long and to able to use my gifts beyond the church to entertain, to uplift, and to inspire," he says.

"You take a step in faith on each record and you try to be a voice. You put your heart in it and you put your life story out there for people to tap into. So Strong is who I am and where I am this season. This album is about this season. You can't tell the whole story in one book so you do it in little doses. Each individual song tells who I am and where I am at the moment. Each album is a chapter in the story."

Referring back to So Strong, Butler concludes, "It's been a tough year. It's been trying and challenging, but we're still standing." And he's standing with a thankful heart, the sparkle of optimism in his eyes and a glorious smile upon his face.

"It's gonna be a bright, bright sun-shiny day"