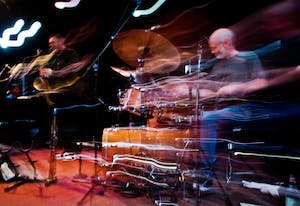 The John Hanrahan Quartet featuring Andrew Dixon, will perform Wayne Shorter's JuJu album in its entirety, the adventurous music immortalized in the 1965 Blue Note masterpiece at Yoshi's on January 27, 2020. The John Hanrahan Quartet has been playing together in Chicago and around the globe for over 20 years. Many Central Coast jazz fans will recognize the John Hanrahan Quartet from their breakout performance at the 2014 Monterey Jazz Festival, where they paid tribute to John Coltrane's 'A Love Supreme', widely considered one of the greatest jazz recordings of all time.

The quartet has now turned it gaze towards another one of the greatest years of contemporary popular music: Wayne Shorter’s JuJu Album. Blue Note Records released JuJu, the fifth album by popular jazz saxophonist Wayne Shorter, in July 1965. The record was Shorter’s second for Blue Note, following Night Dreamer. Also featured on Juju is Hanrahan’s muse and mentor Elvin Jones, the drummer who contributed to making the album the classic treasure that it is.

The Chicago Tribune wrote of the tribute that "the Hanrahan Quartet embrace, honor, and nurture a masterpiece." If any group is suited for paying homage to such iconic artists and moments, it's this Quartet, which brings enthusiasm and sensitivity to the music.

Featuring John Hanrahan on drums; Andrew Dixon on Sax; Dahveed Behroozi on Piano; and Giulio Javier Cetto on Bass, this encore performance of Juju will be an evening not to be missed, when Yoshi's fans will be elated with the recreation of this stylistic album, like only the John Hanrahan Quartet can achieve.

A veteran of the Chicago music scene, Santa Cruz based drummer/singer John Hanrahan has made a strong and versatile impression in jam bands throughout the country as well as the project with his quartet performing and releasing in 2016, John Coltrane’s A Love Supreme at the Kuumbwa Jazz Center.

Currently the John Hanrahan Quartet has been performing a variety of tributes around the Bay Area to great jazz musicians of the 60’s, including John Coltrane, Wayne Shorter, and Miles Davis projects. You can also find Hanrahan performing throughout the Bay Area with Freestone Peaches, Stu Allen and Mars Hotel, Matt Hartle and Colorado’s own Shakedown Street.