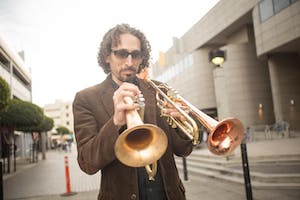 In 1996, he founded the John Daversa Big Band, which is one of the leading forces of modern jazz today. Junk Wagon: The Big Band Album (2011), won Best in Show and Awards of Excellence in Creativity/Originality and Production in The Global Music Awards. “Daversa's fearless exploration...takes him off the beaten path, as he creates bold and ballsy big band music for the modern epoch.”-- AllAboutJazz.com