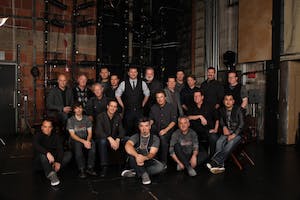 Gordon Goodwin aspired to lead a big band from a time before he can even remember. His position at the forefront of 18-piece Big Phat Band, one of the most innovative and versatile collectives of the past thirty years, speaks reams about his seemingly limitless talents as an instrumentalist, composer, arranger, conductor and bandleader.

“Every time we make a record or play a show, we’re trying to tap into that fundamental, universal rhythm of big band music that seems to transcend the generations,” says Goodwin. “We’ll get middle school and high school kids coming to our shows and buying our CDs, we’ll get their parents, and we’ll get their grandparents. What other kind of music has that range of demographic appeal?”

Born in Wichita, Kansas, he moved with his family to California when he was only two. At a very early age, so his mother told him, he would tune in to The Mickey Mouse Club on TV and stand in the middle of his living room, pretending to conduct the orch. It seemed innocent enough, but it was just the beginning.

By the time he reached grade school, he was studying piano and saxophone - two instruments on which he excels to this day. While his classmates in junior high and high school were tuning in to the Beatles, the Rolling Stones, Motown and other iconic rock and pop artists of the ‘60s, Goodwin was charting his own big band compositions and vibing to icons of a different era: Duke Ellington, Buddy Rich and Thad Jones.

By the early ‘70s, he was able to establish a stronger connection to the soundtrack of his generation via bands like Earth Wind & Fire, Blood Sweat & Tears and others that grafted elements of jazz and swing to the basic components of rock and pop. During high school, he played in youth ensembles that came out on top of just about every competition in the region, including the Monterey Jazz Festival.

During his college years at Cal State Northridge, he spent his days studying and his nights playing piano and sax in a rock band whose repertoire included hits by some of the aforementioned jazz-rock powerhouse bands. After college, he spent a few years during the late ‘70s and early ‘80s providing music for various aspects of the Disneyland theme park in Anaheim, California. The gig led to opportunities to compose and arrange for TV series produced by Disney, Warner Brothers and others.

“I was pretty diversified throughout the ‘80s and ‘90s,” he says. “I’d do a TV show here, maybe some musical theater there, then I’d go play a bar mitzvah, then I’d go on the road and conduct for Johnny Mathis.”

Mathis, who once called Goodwin “a man of exquisite musical tastes,” was just the tip of the iceberg. Over the past couple decades, Goodwin has composed, arranged and/or conducted for a host of artists, including Ray Charles, Christina Aguilera, Natalie Cole, Sarah Vaughan, Mel Torme and Quincy Jones. On the big screen, his scoring can be heard on dozens of films, including The Sorcerer’s Apprentice, Get Smart, National Treasure, The Incredibles, Remember the Titans, Armageddon and Gone in 60 Seconds.

The gigs were steady, the work was interesting, the pay was good and the multiple Emmy awards during the period were a testament to the quality of Goodwin’s skills as a composer and arranger. But something was missing, he recalls.

“It was great, and it wasn’t me,” he says. “I started thinking, ‘Was this going to be my legacy? Was I going to be the guy who jumped around to all these gigs and had a little big-band project on the side? Or is big-band jazz the thing that I really believe in and really want to be committed to?’ I realized that it was, and I started to think that, ‘Maybe I have a little more road behind me than I have ahead of me, so maybe it’s time to start getting it done.’ And that was when I started to get serious about the Big Phat Band.”

Having amassed 20 Grammy nominations, four statues and three Emmy wins, Gordon Goodwin is the most decorated big band leader in the 21st century. He is leader of Gordon Goodwin’s Big Phat Band, an internationally known ensemble with a reputation as one of the most exciting large ensembles in jazz.

The BPB has released seven critically acclaimed records, its most recent being Life in the Bubble, which garnered four Grammy Nominations, and won the Grammy for “Best Large Ensemble Album.”

Gordon’s composing for film and television has garnered him three Emmy Awards. He has written and worked with artists like Ray Charles, Christina Aguilera, Johnny Mathis, Natalie Cole, David Foster, Sarah Vaughan, Mel Torme, and Quincy Jones, to name a few. His charts are played all over the world, and along with his method books and CDs, have been a robust source of inspiration and learning for thousands of young musicians.

“The musical philosophy of the Big Phat Band has, from the beginning, pushed back at these kinds of limits,” says Goodwin. “This is a band made up of a group of musicians with diverse interests, and wide skill sets, and we have always strove to break down barriers between musical styles.”