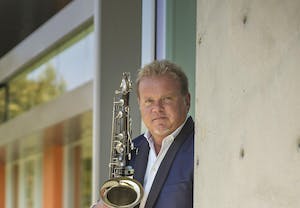 “Fear and creativity can not live in the same room,” declares free-spirited and consummate chart-topping saxophonist, composer, producer and radio host Euge Groove. “You can’t bring fear into the creative process. It took me a while to get that.” Euge Groove’s Ying and Yang and ebb and flow approach to his artistry and life have allowed him to enjoy a career longevity that is atypical. The highly sought after musical chameleon has been called upon for his musical prowess by everyone from Rock `N' Roll Hall of Famer Tina Turner and balladeer Luther Vandross to UK Blues Rocker Joe Cocker, Richard Marx, Tower of Power and Huey Lewis and the News, among countless others. A road warrior, Euge Groove stays at the top of his game by maintaining a busy touring schedule. “I love live performance, which is probably pretty obvious to anyone that has seen me live,” shares the charismatic saxman. “On a sonic level, I try to capture the space of a live performance when I record. Instead of going for a really ‘dry’ soundstage, I try to envision what the sound would be if it was playing on a theater or small venue stage.” August 19, 2014 Shanachie Entertainment released GOT 2 BE GROOVIN’, created over a six month period and the latest installment in Euge Groove’s musical evolution. “It was a blessing to take some time off from touring and really be able to focus on the creating this project,” states Euge. “I’ve built a great studio here at the ‘Groove House’ and it makes me feel good just to sit in it. I’ll light a bunch of candles, incense, warm lighting, and just open the mind to music. It’s an amazing feeling.”

In an industry where artists are consistently put in a box and categorized, Euge Groove remains an artist who chooses to continually push the boundaries and let his music go where his heart leads. “Good music is good music, no matter what.” Euge’s open heart and ears have led him to the top of the charts multiple times resulting in thirteen #1 hits. GOT 2 BE GROOVIN’ is sure to find a home at the top once again.