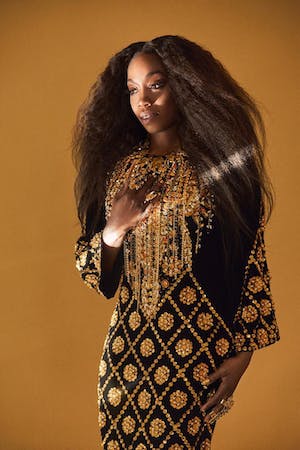 The most enduring love stories often repeat themselves during different times, at different places, and in different people.

As Estelle built the framework for her fifth full-length and first album for the newly minted partnership between her own Established 1980 label and VP Records, Lover’s Rock, the multiplatinum GRAMMY® Award-winning UK singer, songwriter, actress, and humanitarian realized a pattern. Her own relationship experiences bore a subtle resemblance to those of her Senegalese mother and Grenadian father who “got together, had children, broke up, found each other again twenty years later, and happily married a decade after.”

Sharing her personal life without a filter, the process continued a long tradition of sharp straight talk.

“As I started writing, I kept talking about how mind-blowing my parents’ story was to me,” she recalls. “I thought about what it meant, what it looks like, and how it relates to me. I’ve always been one-hundred percent real, so I wrote about why I personally couldn’t get the love I wanted. As my mom heard the music, she was like, ‘That’s what me and your dad went through too!’ While I chronicled my life in the lyrics, I subconsciously based it on their lives. My records are my truth and where I’m at any given time. It was one-hundred percent natural.”

Lover’s Rock wouldn’t just be a reprise of this love story though. By the same token, the music from her formative years reappeared in the album’s DNA as she rooted the record in the reggae and Afrobeat sounds of her childhood. She can vividly recall classics from Dennis Brown, Freddie McGregor, Pépé Kallé, Bob Marley, Fela Kuti, and more resounding in the house. Throughout her career, she carried a passion for these styles, bumping Vybz Kartel on the tour bus and soundtracking dinner parties at her Brooklyn pad with West Indies favorites.

As the vision for the music took shape, she tapped the talents of producers such as “Come Over” collaborator Supa Dups—who contributed four songs—Dre Harris, Reefa, and more to bring a cohesive vision to life.

“This is the first time I’ve done a whole body of work exactly like one genre or part of the world,” she goes on. “It had to be cohesive, because it is so personal. Normally, I go into different chambers and do various genres. However, it felt right to follow one vibe. This is what I grew up on. It’s what I thought of as real music for as long as I can remember. To me, it’s second nature.”

She initially teased the offering by way of “Love Like Ours” featuring Tarrus Riley. Within a few months, it cracked seven million cumulative streams and earned acclaim from Essence and Complex who declared, “Estelle has a knack for creating songs about love, and her latest might be one of her best yet.” Produced by Harmony Samuels, the follow-up “Better” featured on Reggae Gold and heralded the album’s impending arrival. Pairing her silky delivery with finger-snaps and airy percussion, it slips into an Island-inspired cadence before a high-energy breakdown as she proclaims, “No one in the world can love you better.”

“I wanted to make something that captured the feeling of walking into a room and knowing at the bottom of your heart, this other person is the one,” she says. “It pushes through your spirit. You know you’re going to be together forever.”

Elsewhere, “Lights Out” remains “the most Lover’s Rock song on the album.” Its steady beat and laidback guitar underscore a blockbuster vocal performance from Estelle as she seamlessly invokes the Caribbean spirit on each bar tracked in one take.

“Picture a super dark club,” she sets the scene. “All you’re doing is winding on somebody against the wall. You can barely see each other in the dark, but you’re damn near having sex it’s so close,” she grins. “You’re letting your guard down and giving in to passion.”

Channeling explosive chemistry, she duets with Luke James on the slick and sunny “So Easy” produced by Jerry Wonda, while “Sweetly” lets a paramour down easy with “a calm breakup anthem.” Additional collaborations include Maleek Berry on “Meet Up,” Kranium on “Don’t Wanna,” and Established 1980 act Nick & Navi on “Really Want” with Konshens. Elsewhere, “Ain’t Yo Bitch” goes full-on Soca. “Since my dad’s from Grenada, I had to do one Soca record or he might kill me,” she laughs. “I got to mix Africa and the West Indies into one.”

Lover’s Rock represents a full circle moment for Estelle. On the heels of her acclaimed 2004 debut The 18th Day, she soared to international prominence on 2008’s Shine—now celebrating its tenth anniversary. The lead single, “American Boy” featuring Kanye West, won a 2009 GRAMMY® in the category of “Best Rap Sung Collaboration” and achieved an RIAA double-platinum certification. She released the follow-up All Of Me in 2012, and the single “Thank You” received a GRAMMY® nomination for “Best R&B Performance.” 2015’s True Romance yielded the smash “Conqueror.” Guest starring in a popular episode of Empire in Season One, she joined star Jussie Smollett for a duet of the tune. It stood out as “one of the show’s highest-charting songs” and fueled the Original Soundtrack to a #1 bow on the Billboard Top 200. Beyond Empire, she has cameoed in films such as Girls Trip and voiced lead character Garnet on Cartoon Network’s smash Steven Universe since 2013. Estelle has also launched her own online boutique named Elle Vie.

Simultaneously, she launched the All of Me foundation. The charity grants college scholarships and opportunities abroad to youth. Among many highlights, it sponsored a trip to Senegal for Los Angeles students who had never ventured outside of the city prior.

In the end, Lover’s Rock communicates a narrative that’s as universal as it is personal for Estelle as well as a love story for the ages.

“I want people to walk away with a feeling that love is possible,” she leaves off. “That’s why I’m sharing all of this. Hopefully, we all get that feeling.”