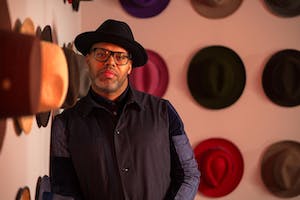 Eric Roberson, also known as Erro, is no stranger to the independent music game, having been an independent artist for the last 20-years. Roberson is known as the King of Independent Soul and R&B, being such a multifaceted Grammy nominated singer-songwriter, producer and CEO.

Having worked with leading music industry entertainers such as saxophonist Boney James, singers Jill Scott, Musiq Soulchild, Dwele, and Vivian Green and many others, Roberson is ready to let his fans into his musical process with the release of his 2018 online subscription platform “The Process”. The Process was created to build a community/forum of music lovers and creative thinkers. Coming up on its one-year anniversary, The Process has been progressive, with close to an exclusive following of 500 patrons and counting. The app offers fans and creatives alike access into Eric Roberson's creative process, past music catalog, and live video sessions, while also allowing consumer feedback and so much more.

While Roberson has a strong love & passion for music and its many processes, the New Jersey native and Howard University alum credits his family as one of his biggest influences and support systems. The Robersons are the true definition of FAMILY BUSINESS. From his parents supervising tour merchandise to his children acting as his A&Rs, being the first to hear and react to every lyric uttered, they embody The Process platform.

Roberson is proud to announce the 10-year anniversary of his Grammy nominated studio album Music Fan First as an upcoming tour. Roberson continues to evolve and push the envelope. This husband, father and music impresario will continue to expand his reach, and if you are lucky enough you will have front row seats to The Process.