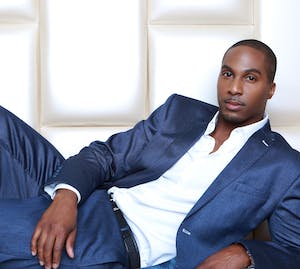 One of the most fearless musicians in contemporary jazz

Every now and then an artist bursts onto the scene, changing the rules and challenging the status quo. Eric Darius is one of those artists fearlessly pushing all musical boundaries. He is one of the most exciting musicians to enter the Contemporary Jazz scene in the last decade. His explosive arrival as a recording artist at the age of 17 caused a frenzy worldwide! Now, with six critically acclaimed albums under his belt, a Number One hit single, and Seven Top 10 radio hits on Nielsen’s R&R/Billboard Contemporary Jazz Charts, international recording artist, Eric Darius, is on the verge of superstardom. Prophetically hailed Debut Artist of the Year by Smooth Jazz News in 2004, Eric has shared the stage with innumerable world renown, Grammy Award-winning artists, such as Prince, Jamie Foxx, David Foster, Carlos Santana, Babyface, Wynton M. & George Benson, just to name a few. His music innovatively crosses over all music boundaries from Jazz, R&B, Hip-Hop, to Pop, creating a very distinctive, fresh sound and approach that is uniquely his own.

Saxophonist, composer, producer, and vocalist Eric Darius likes to play by his own rules. He’s a visionary who has learned to listen to his own inner voice. Steeped in tradition and grounded in the lessons learned from his mentors, Darius is not afraid to push himself and his art forward. The Renaissance man reaffirms this credo on his sixth album as a leader and second recording for Shanachie Entertainment. “Retro Forward represents my musical statement as an artist who’s not confined by any boundaries, genres, or rules. As a younger person with roots in the Contemporary Jazz genre, I feel it’s my responsibility to pay homage to the greats that founded this music, but also push it forward to a new, exciting direction that will keep the music alive and relevant for the younger generation,” confesses the astute business scholar.

“Artists such as Prince, Herbie Hancock, Stevie Wonder, Michael Jackson, and Miles Davis have always inspired me because of their fearlessness to express themselves freely from a musical standpoint and allow their music to evolve with each album,” states Eric Darius. Hailing from a musical family with rich traditions in Caribbean music (his father is from Haiti and his mother is from Jamaica), Eric realized his calling for music at an early age. “ I remember being nine years old and hearing a saxophonist play at my church. I instantly loved the sound…I remember being blown away by the soul and emotion of the instrument. It was as if I could almost hear the words and lyrics with each note being played…it was at that point that I fell in love with the instrument. The saxophone has a way of connecting with people in a way that no other instrument does. To me, its expressions are closest to the human voice.” Darius is one of those musicians who was fortunate to benefit from music programs in the school system. As a result the young musician has made it a mission to pay it forward and has spent a considerable amount of time exposing young students to music in the public school system with his On A Mission in the Schools campaign. He shares, “It is important to me that these types of music programs remain available for children. One of my goals is to expose young kids to music with substance and to help make them aware that music can be an outlet for their emotions…that it can be a positive influence in their lives. By age eleven—after only playing for one year—Eric was chosen to be in Sonny LaRosa and America's Youngest Jazz Band, which consisted of young musicians, ages five to twelve. The group toured the country and even played at the prestigious Montreux Jazz Festival in Switzerland.

Throughout Eric’s young but already dynamic career, he’s had the tremendous opportunity to travel and perform worldwide with numerous groups. Even as a high school student at Blake High School of the Performing Arts and college student at the University of South Florida in Tampa, he had the fortune to travel internationally at such a young age. The much in demand saxman’s worldwide gigs include Japan, Indonesia, London, Spain, Germany, France and Italy, among countless other countries.

“My goal is to really help bridge the generational gap and make music that has infinite possibilities,” concludes Eric Darius. With the release of Retro Forward, Eric Darius is building bridges, forging new paths and ensuring that his heartfelt, organic and honest approach to the music will stand the test of time. Whether he’s being featured on FOX’s hit TV show, The X Factor, or TNT’s hit drama series, Mob City, Eric’s presence is definitely being felt in the entertainment world. He continues to be an artist that knows no boundaries and a force that is unequalled in today’s musical landscape.