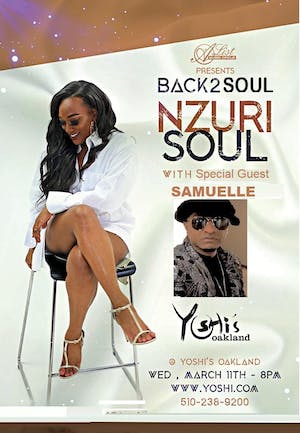 Two of the Bay Area's most soulful entertainers

These two dynamic artist have earned their place amongst the Bay Area's most soulful entertainers of 2019. While working the local club circuit performing classic top 40 hits from some of their favorite soul pioneers like, Aretha Franklin & Marvin Gaye to name a few; Kimberli "Nzuri Soul" Stafford & Samuelle Prater both represent two of the best in new Bay Soul & R&B. Come experience an enchanting evening with these remarkable soul singers performing their favorite soulful classics and original songs from their new projects while leading the way in the Bay as the next music industry SOUL-SATIONS!

Presented by Mark Elliott of the A-List Musiq Circle - Your Bay Area's Who's Who Entertainment Network.

With passion for performing and music, a Nzuri Soul show is high energy and filled with soulful originals & tributes to the greatest in R & B, Soul, rock, pop & country. This show will debut Nzuri’s latest single “Sooner”.

Born and raised in the San Francisco, Bay Area and grew up in the city of Berkeley California as the youngest of 3 Boys. Samuelle grew up in a musical family where everyone played instruments and sang as well. At age 18, barely out of high school, Samuelle was asked to try out for a lead vocal spot for a new group which he got almost instantly. At the time they didn't have a name, but was later to become the Grammy award winning band Club Nouveau and was signed to the Warner Bros Label in 1986,with the release the gold selling album titled (LIFE LOVE AND PAIN). Samuelle gave us his smooth, soulful and early hip hop style vocals on hits such as Jealousy, Situation #9, Why You Treat Me So Bad, Heavy On My Mind and the classic Bill Whither remake of Lean On Me. Samuelle also sang lead on a song titled ‘Step by Step’ on the Modana multi platinum soundtrack’ who’s That Girl’.

After having great success with Club Nouveau, Samuelle went on to sign a solo deal with Atlantic record and released his 1st single which also went to the number 1 spot on Billboard R&B charts in 1990 Titled (So You Like What You See) which he wrote along with Foster McElroy(2 Tuff Enuff productions team which also brought you Club Nouveau, En vogue, and Tony! Toni! Tone!. The single can also be found on the very popular video game “Grand theft Auto San Andreas Fault”. Samuelle has continued to sing, write, produce, and perform with Club Nouveau, traveling all over the world doing what he loves to do, sing!

Samuelle is currently working on a new project title TBT that will be released the summer of 2020. He has also released new music in 2019 such as "HUMAN", which is a song he wrote to shed light about sex trafficking and humanity, and another song titled "VOICE" which is putting the spotlight on mental Illness. He’s also released a project along with his brother Dlynn. The singing brothers duo was called SECRECY and they released a wonderful cd titled "SEASONS" filled with smooth R&B and Rhythmic love songs.