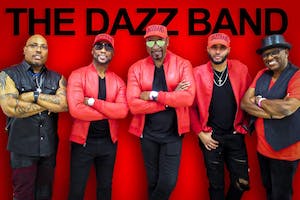 The Dazz Band, formerly Kinsman Dazz, was the first R & B group from Cleveland, Ohio to win a Grammy Award for Best Performance by a Group or Duo for their smash hit “Let It Whip” on Motown Records. Led by Saxophonist Bobby Harris, the group scored 20 hits on Billboard R & B and Pop charts, and achieved Platinum & Gold record status. The Dazz Band performed on popular television shows throughout the 80’s and 90’s such as Soul Train, Solid Gold and American Bandstand. Hits like “Let It Whip”, “Joystick”, “Heartbeat”, “Party Right Here”, “Swoop”, “Let It All Blow,” “Keep It Live” and more stood the test of time as close to one million monthly listeners continue to download and stream Dazz Band music across the globe. Lead vocalist and trumpet player Skip Martin has been performing with The Dazz Band for a combined total of over 25 years. Along with Harris, Skip Martin was a part of the Grammy Award winning Dazz Band in 1982. Skip's vocals can be found on Dazz Band hits and his voice, combined with masterful trumpet skills and high level performance skills, make him a musical force to be reckoned with. Skip Martin is a MOBO Award recipient who achieved an honorary Doctorate in Music for his talents both vocally and through instrumentation. In 2019, Skip released the CD “Tales of a Paid Piper” highlighting some of his most impactful moments with the Dazz Band, and a children’s book entitled “Morgan the Clydesdale Pony” encouraging children to never give up on their dreams.

In 2014, The Dazz Band was pleased to welcome accomplished vocalist Donny Sykes to the group. Donny Sykes has traveled the world performing in musical theatre with the renown Spirit Productions “All Night Long” featuring the Motown hits, and “Man in the Mirror” featuring music of the legendary King of Pop, Michael Jackson. Donny’s live performance credits include working on projects with legendary artists like Stevie Wonder, Tyler Perry, Beyonce and Kanye West. Donny’s voice can be found on the Dazz Band’s new single “Drop It”, and on the Dazz Band’s new ballad scheduled for release in 2020. Guitarist Marlon “The Magician” McClain joined The Dazz Band in 1984 and has been with the group for a combined total of over 30 years. Marlon's Writer, Producer, Arranger, and/or Performance credits include: En Vogue, Toni Braxton, George Clinton, George Benson, Jeff Lorber, Kenny G, Dazz Band, Charlie Wilson, Christine and the Queens and more. Marlon is a self-taught musician who began his professional music journey as guitarist and co-founder of Portland, Oregon’s nationally known group Pleasure. A masterful Guitarist and Producer, Marlon enjoys developing new artists including his niece Whitney McClain, and his son Marlon ll aka “Brando” featured on the smash hit “Body” with Loud Luxury.

Award winning Drummer, Percussionist, Producer and Songwriter Raymond Calhoun returned to the Dazz Band in 2019. Raymond performed as Drummer on Dazz Band albums Here We Go Again and Time Traveler. A native of Washington DC, Calhoun studied music at Howard University before getting his first break with the Manhattans. It was not long after he was discovered by The Gap Band, where he would spend his next 33 years. As a member of The Gap Band Calhoun wrote one of the band's signature songs "Outstanding" off their platinum selling album Gap Band IV, which stood the test of time, and remains one of the most sampled songs in hip-hop history

The Dazz Band has continuously performed with legendary artists from a variety of musical genres throughout the 2000’s. In November, 2019 they released their new single dance single “Drop It” available on Itunes, Apple Music, & Spotify.

Venue Information:
Yoshi's
510 Embarcadero West
Jack London Square
Oakland, CA, 94607
Community is what brings us together and for nearly 50 years Yoshi's Oakland has been connecting us all through a language we know best - music. As the coronavirus pandemic continues to disrupt our everyday lives, Yoshi's, much like countless other venues/restaurants in the area, faces the uncertainty of survival.  Please consider donating to our relief fund on GoFundMe and help Yoshi's stay open for years to come.DONATE NOW - YOSHI'S OAKLAND RELIEF FUND
+