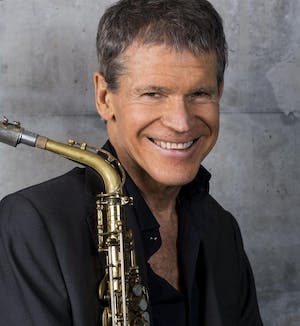 Universally known as one of the most iconic saxophonists of the current age, David Sanborn is a jazz musician at heart, but has transcended genres and musical boundaries throughout his entire career. Rolling Stone says, ‘Among the great saxophonists of the past four decades, David Sanborn has earned an identity all his own. He’s jazz, he’s funk, he’s soul, he’s pop, he’s blues, he’s rock. Most remarkably, he excels in each of these genres with a voice that is forceful and tender, sensuous and subtle.’ Sanborn has released 24 albums, won six Grammy Awards, and has had eight gold albums and one platinum. He continues to be one of the most active musicians of his genre and an inspiration to countless other musicians.

Returning to his passion for jazz, Sanborn recently assembled a stunning program of straight-ahead jazz tunes for his new quintet. Looking forward to sharing his approach and interpretation on a new album in 2018, Sanborn is excited to collaborate and feature a band of saxophone, trombone, keys, bass, and drums.