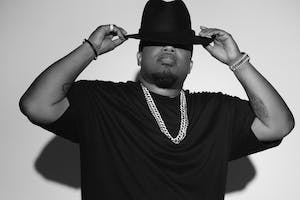 Dave Hollister is an American R&B vocalist who found fame during the 1990s as one quarter of the Platinum-selling R&B quartet Blackstreet before going on to a solo career.

Hollister is cousin of musical artists act K-Ci & JoJo. He started developing fame as a musician in the early 1990s. Some of his biggest early appearances were with 2Pac on tracks like "Brenda's Got A Baby" and "Keep Ya Head Up" where he was credited on both as "The Black Angel" as well as the original version of "Don't You Trust Me." The remake of which was released on Loyal to the Game.

His next big move was when he was signed to Teddy Riley's R&B group Blackstreet in 1994. He worked with the group on their first album and then left the group to pursue his own solo career. He was signed to DreamWorks Records and began working on an album.

Hollister's follow-up album, Chicago '85... The Movie was released in 2000. The album was an autobiographical work and went gold. "One Woman Man" the album's biggest single, reached #8 on the R&B charts. Also in 2000, Dave Hollister collaborated on "He Say, She Say" with Keith Sweat on "Don't Have Me".

For his third effort, Hollister moved to Motown Records. He hoped the new label would instill new energy into his music. The album, Things In the Game Done Changed was released in 2002 and fared poorly on the charts and radio.

As a result of the album's shortcomings, Hollister returned to DreamWorks where he released Real Talk in 2003. Following the album's release, Hollister moved to Gospo Centric.

Hollister is reportedly wrapping up his fifth album in the industry, The Book of David: Vol. 1 The Transition. The album will be coming out on September 26, 2006 from Gospo Centric.

Dave has also reunited with his former group Blackstreet and will be performing with them on their upcoming reunion tour along with Guy Blackstreet's founder Teddy Riley's other group. In addition to Riley Blackstreet members Chauncey Hannibal, Mark Middleton, and E.W. will be a part of the reunion. Guy members in addition to Riley will include brothers Aaron Hall and Damion Hall. Teddy Riley has decided to only focus on Blackstreet and Mark Middleton and E.W. are no longer a part of the reunion. Blackstreet's lineup has tweeked again and now Mark Middleton & E.W. are back along with Teddy Riley and Dave Hollister. Chauncey Hannibal was there but is no longer with the group anymore as he's pursuing a solo career.