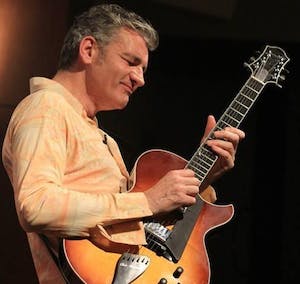 Celebrating an extraordinary and prolific 20 years since the release of his debut album Velvet, Chris Standring grabs his Benedetto Bambino archtop electric guitar and spins his trademark retro-meets-modern vibes in fresh and unexpected directions to create the perfect antidote for these daunting, uncertain times - a powerful, melodic and rhythmically infectious burst of Sunlight.

A bright, ambitious soul jazz experience from the static electricity sounds that start “Static In The Attic” through the wah-wah vocals in the song’s closing reprise, the multi-talented British born, Los Angeles based composer/producer’s latest album draws on his trademark, slightly off the beaten path urban jazz artistry and distinctive passion for working with warm, organic and soulful instruments. As it flows and vibes along, the collection artfully reveals an artist perfectly comfortable in his own skin. No longer on a quest to discover his musical identity, Standring has fully arrived at a place where he can declare, “This is what I want to say, and this is who I am!”

If he seems to be defiantly accentuating the positive, it's by design. One of the creative breakthroughs putting a new spring in his step is taking the opportunity, after years of thoughtful contemplation, to re-imagine his favorite song of all time, Brian Wilson's epic Beach Boys classic "God Only Knows," and bring it into a lush, atmospheric soundscape all his own. He’s also ensembling with a batch of his favorite handpicked musicians, including bassists Andre Berry, Jimmy Haslip and Roberto Vally, and drummers Chris Coleman (Prince, D, Sanborn), and D, Karasony. Helping him create the perfect retro soul flavors throughout are some of the world’s premiere keyboardists, including longtime collaborator Rodney Lee, Mitchel Forman and John Novello. Famed tenor saxophonist Pete Christlieb fuels the playful horn section hook of “Do Not Adjust Your Set,” which also features a high energy solo by saxman Brandon Fields.

“Overall, Sunlight’s got a joyful, upbeat vibe” he says. “It’s not a dark record in any way, although the last track ‘The Principle of Pleasure’ gets a little intense. I wanted to find some kind of word that described the overall feeling of the album, and despite the diversity from track to track, thought ‘Sunlight’ captured the positivity and optimism of the music perfectly. It’s got an upbeat spirit about it. It probably wasn’t conscious, but maybe deep down I was being reactionary, calling out and taking a stand against the darkness of these times. For a lot of people, music can be a bright spot no matter what’s going on with them personally and in the world.”