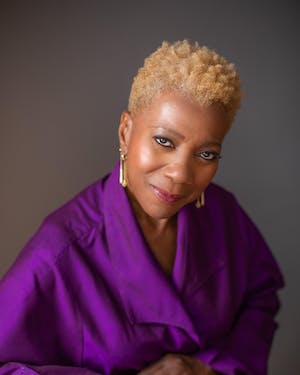 “In a world of pretenders, Carmen Lundy is a genuine Jazz Singer” - The Evening Standard

"Musicians as diversely gifted as Carmen Lundy, who has excelled as a vocalist, composer, lyricist, arranger, and pianist for more than three decades, remain far and few between." - Jazz Times

Jazz singer, composer and arranger Carmen Lundy hails from Miami, Florida and received her B.M. degree from the University of Miami. In 1978, Lundy moved to NYC and in 1985, she released her first solo album entitled Good Morning Kiss, which topped the Billboard chart for 23 weeks.

Currently on the Afrasia Productions label, Carmen will release her 15th and newest album Modern Ancestors in October, 2019. Her previous release, 2017’s Code Noir, debuted at #9 on the Billboard Jazz Chart and received both critical and popular acclaim. Carmen’s other releases include Night and Day, Self Portrait, Old Devil Moon, This Is Carmen Lundy, Jazz and the New Songbook: Live at the Madrid, Come Home, Solaments, Changes, and Soul To Soul among others, and have all topped the Best Albums and Top Ten albums lists on Downbeat, JazzTimes, and JazzWeek.

Among Lundy’s awards and recognitions are a Grammy for Terri Lyne Carrington’s Mosaic Project – Grammy® Winner for Best Jazz Vocal Album of 2011- which features the Carmen Lundy composition “Show Me A Sign”, with Lundy’s original performance from the album “Solamente” reinvented on the arrangement.

In January 2018, Carmen Lundy received the RoundGlass Music Award for her song "Kumbaya" from Code Noir. In 2016 she was honored with the 2016 Lifetime Achievement Award in Jazz by Black Women In Jazz and The Arts, in Atlanta, GA. Additionally, she was honored with Historymaker status by the esteemed The Historymakers® organization, the nation’s largest African American video oral history collection based in Chicago, IL. Among her other awards and recognitions, especially rewarding was Miami-Dade's County Office of the Mayor and Board of County Commissioners proclaiming January 25th "Carmen Lundy Day”, along with handing Ms. Lundy the keys to the City of Miami.

Carmen Lundy’s work as a vocalist and composer has been critically acclaimed by Jazz Times, Downbeat, The New York Times, The Wall Street Journal, The Los Angeles Times, Variety, The Washington Post, and Vanity Fair among numerous other foreign publications. Lundy has acted as Resident Clinician at Betty Carter's Jazz Ahead at The Kennedy Center in Washington, D.C. for 20 years. She has conducted Master Classes around the world, among them the Thelonious Monk Institute of Jazz and The Sibelius Academy in Helsinki.

Ms. Lundy is also a gifted actress active in theatre. "Acting," as she told Dr. Billy Taylor in 2006, "helps me to get more comfortable and acquainted with the art of performance." She performed the lead role as Billie Holiday in the Off-Off Broadway play "They Were All Gardenias" by Lawrence Holder, as well as the lead role in the Broadway show, Duke Ellington's "Sophisticated Ladies," and she made her television debut as the star of the CBS Pilot-Special "Shangri-La Plaza" in the role of Geneva, after which she relocated to Los Angeles, where she currently resides.