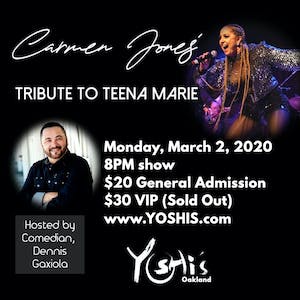 Hosted by Comedian, Dennis Gaxiola, enjoy Carmen Jones as she performs a high energy show with “powerhouse” vocals and funk music that will stir your soul. Jones performs her Ultimate Tribute to Teena Marie with uniquely funky arrangements of the incredible music of the late legendary, Teena Marie. Jones' shows are praised by Teena Marie's friends, family, and devoted fans. In fact, when Jones was a teenager, Teena Marie heard her singing and said, “Don’t Stop”.

Carmen Jones, also a songwriter, often sprinkles in some of her original R&B music to the live shows, including her single, "Just Be True to Me" and her cover of the classic R&B hit song, “Angel”.

Jones headlines sold out shows throughout California, and has opened up and/or performed with Howard Hewett, Al B. Sure, El Debarge and Cameo, and can be seen singing with Jamie Foxx in what has become a viral YouTube video.