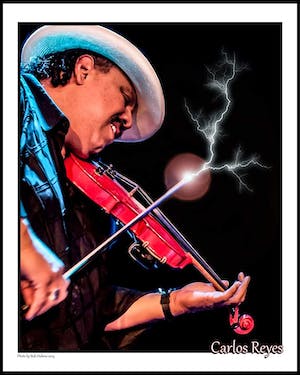 On stage from the age of five, Carlos Reyes never ceases to amaze. World renowned for his mastery of the Paraguayan harp and violin, Carlos' musical talents have touched the hearts and spirits of people around the world. From performances on the streets of Havana to the Vatican, his music transcends all boundaries. Described as "Santana meets Gipsy Kings", Carlos bridges traditional musical genres and mesmerizes audiences with unique fusions of Blues, Rock, Jazz, Latin and Classical styles.

Born in Paraguay to a world-famous musician and national hero, Carlos began to play the violin at age three under his father's strict tutelage. He moved with his family to the United States as a child and continued to develop his already extraordinary musical talent. At age ten, he debuted on harp with the Oakland Symphony and made his debut on violin with the Oakland Youth Symphony at age fourteen.

He continued to develop his talent on both harp and violin, establishing himself as a successful solo artist, touring the world and also sharing the stage with a long list of musical superstars such as Steve Miller, The Doobie Brothers, Clint Black, Charlie Daniels, Wynona Judd, Willie Nelson, slide guitarist, Roy Rogers, Zac Brown and many others. In 2013 Carlos performed at The White House along side Gloria Estefan, trumpet master Arturo Sandoval, Mexican artists Lila Downs and Marco Antonio Solis.

In addition to his profound mastery of harp and violin, Carlos also plays guitar, bass, mandolin, and keyboards; and is a well-respected producer, composer, and engineer with 8 self produced and recorded albums to his credit. Carlos has been at the forefront of introducing the electric harp to the world. He has consistently broken technical and musical boundaries and pioneered techniques that have expanded musical possibilities for musicians and audiences alike. Standing ovations are the norm, not the exception -- when Carlos and his aptly named band "The Electrick Symphony" performs.

Carlos' first album, “The Beauty of it All” received worldwide acclaim and reached Billboard’s Top 10 Jazz and Adult Contemporary Charts. His latest CD, “Ignite” won the famed Cuban, “Cuba Disco Award” for “Best International Album”, an equivalent to a Grammy award. Despite the country’s political differences, Carlos was granted license by both Cuba and the United States to record a live concert in Havana with the prestigious Camerata Romeu Orchestra, and was celebrated by both nations. From the Vatican to Vietnam …..Cuba to California …..his music has been heard and loved all over the world.

The magnitude of Carlos' musical talent is matched only by his spirit and generosity. His passion for helping others is evident through his frequent appearances at benefits such as Hope for Haiti, The Voices of Latin Rock, the Animal Rescue Foundation and work with local school systems and numerous community events.

As a speaker and lecturer, Carlos holds college level workshops and master classes at various universities and colleges in the field of music, harp, violin, with a particular focus on the psychology of “The Art of Stage Performance.” His vast real world experience and training provide a uniquely inspired and multi-tiered learning experience for a variety of audiences. Dr. Daniel Levitin, author of “This Is Your Brain On Music” and “The World In Six Songs”, teamed up with Carlos for a lecture on “The Musician’s Mind In Performance.”