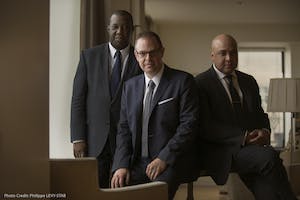 One of the world’s premiere jazz pianists, Bill Charlap has performed with many leading artists of our time, ranging from Phil Woods and Tony Bennett to Gerry Mulligan and Wynton Marsalis. He is known for his interpretations of American popular songs and has recorded albums featuring the music of Hoagy Carmichael, Leonard Bernstein and George Gershwin. Time magazine wrote, “Bill Charlap approaches a song the way a lover approaches his beloved...no matter how imaginative or surprising his take on a song is, he invariably zeroes in on its essence.”

In 1997, Charlap formed the Bill Charlap Trio with bassist Peter Washington and drummer Kenny Washington (no relation), now recognized as one of the leading groups in jazz. Charlap has recorded seven albums for Blue Note Records and received two Grammy Award nominations, for Somewhere: The Songs of Leonard Bernstein and most recently The Bill Charlap Trio: Live at the Village Vanguard.

Charlap is the artistic director of New York City’s Jazz in July Festival at the 92nd Street Y. He has produced several concerts for Jazz at Lincoln Center and an evening of George Gershwin’s music at the Hollywood Bowl.

Born in New York City, Charlap began playing the piano at age three. His father was Broadway composer Moose Charlap, whose credits include Peter Pan, and his mother is singer Sandy Stewart, who appeared on the Ed Sullivan and Perry Como shows and earned a Grammy nomination for her recording of “My Coloring Book.” In 2005, Charlap and Stewart released the acclaimed CD, Love Is Here To Stay (Blue Note).

Kenny Washington was born in Brooklyn. In 1977, while still in his teens, he worked with Lee Konitz and his nonet. He has been a member of the Bill Charlap Trio for the past thirteen years and has performed and recorded with dozens of major artists, giving him a discography of hundreds of titles. Artists include Benny Carter, Betty Carter, Johnny Griffin, Ron Carter, Clark Terry, Milt Jackson, Tommy Flanagan, Dizzy Gillespie, Arturo Sandoval and Benny Goodman. Washington is a noted jazz historian and radio personality; he has written liner notes and helped

prepare re-releases by Art Blakey, Count Basie and others, and has also been a disc jockey on WBGO and Sirius satellite jazz radio. He currently serves on the faculties of Purchase College, State University of New York and The Juilliard School, teaching drums and jazz history.

Peter Washington is one of the most in demand and recorded bassists in modern jazz, with a discography of over 400 recordings. Born in Los Angeles, Washington played classical bass as a teen and majored in English Literature at U.C. Berkeley, where he became interested in jazz. He was invited by Art Blakey to join the Jazz Messengers in New York. From there Washington became part of two of jazz’s most celebrated trios: the Tommy Flanagan Trio, and for the past thirteen years, the Bill Charlap Trio. Washington’s freelance work roster is a “who’s who” of jazz, including Dizzy Gillespie, Clark Terry, Milt Jackson, Johnny Griffin, Bobby Hutcherson and the Carnegie Hall Jazz Band. In 2008, Washington became part of The Blue Note 7, a septet formed in honor of the 70th anniversary of Blue Note Records. The group recorded the album Mosaic and toured the U.S. in 2009.