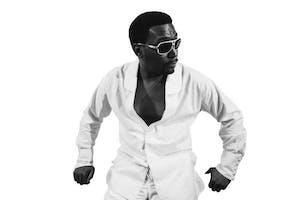 One of the most influential rappers of all time

On September 10th 1968, Bed-Stuy, Brooklyn became the home of one of hip-hop's most lyrically diverse, innovative, trendsetting Master of Ceremonies. He’s been branded Dark Gable, Black Caesar and King Asiatic Nobody's Equal, but is undoubtedly known to the world as BIG DADDY KANE.

Big Daddy Kane undisputedly defined the term “lyricist” in the world of hip-hop. Along with the lyrical ingenuity he brought to the genre, he also introduced innovative live performances. Kane was the first rapper to ever hold not one but two sold out shows at the world famous Apollo Theater for women only. These lives performances, which consisted of theatrics, choreography and tailored costumes proved that Big Daddy Kane was not only an M.C. but he was a full entertainer. Kane revolutionized hip-hop fashion and the way hip-hop shows were performed.

Kane’s musical career as an artist began when he was signed to Cold Chillin’ Records in 1987. It was then that he released his debut single “Raw”, which became an instant hit. He soon became known for being able to flow with ease even over the fastest of beats. This style of rap has become his legend. As for his personal finesse, we can thank his pioneering style for the reemerging trend of four-finger rings, rope chains and high- top fades.

Kane was one of the first rappers with several Gold albums. He has endured a long career giving us a catalogue of music such as his debut album "Long Live The Kane" which features the classics "Ain't No Half Steppin'" and "Raw". He debunked the sophomore curse with his 1989 hit "It's A Big Daddy Thing" which features the tracks "Smooth Operator," "Warm It Up" and the Teddy Riley produced classic "I Get The Job Done". This album is his most successful album to date, and became certified gold by the RIAA.

As a powerful figure in the rap game Kane has collaborated with many artists such as Kool G Rap, Masta Ace and Craig G on the Marley Marl produced "The Symphony". He worked with Public Enemy and Ice Cube on the single "Burn, Hollywood Burn," with Heavy D on the single "Don’t Curse", with UGK on “Next Up”, with Busta Rhymes on the remix of “Don’t Touch Me”, with Patti LaBelle on the certified gold single "Feels Like Another One" and `the Quincy Jones multi-platinum masterpiece "Tribute To Birdland" and the title cut "Back On The Block" from the album of the same name.

Over the years since his debut, Kane has added actor, designer and brand ambassador, and fine wine connoisseur to his already extensive resume. His distinctive baritone voice has been heard as the narrator of the critically acclaimed documentary film “Notorious” and TV One’s “Being”. Kane’s big screen credits include the films ”Posse”, “Meteor Man”, “Dead Heist”, “Brown Sugar” and “Gunmen”. These films prepared him for roles in “Exposed” co-starring Keanu Reeves and “Movie Madness” co-starring Lorenzo Lamas, both released in 2016. Recently, Kane was featured on an episode of Law & Order SVU and a short film entitled “Stomach People”.

Kane’s love for fine wines inspired him to release a signature BDK wine entitled “A. Monterio”, scheduled to be released late 2018. His sex appeal has prepared him to be the Brand Ambassador of B. Walker Shoes, where he also designed the limited edition BDK Collection.

Kane has been featured in every magazine from Rolling Stone to The Source and included on every list of greatest M.C.’s dead or alive. Kane’s body of work has been solidified when presented with a Grammy, a VH1 Hip-Hop Honors Award and countless Lifetime Achievement Awards. In 2017 Kane was inducted into the Long Island Hall of Fame and in 2018 Big Daddy Kane was not only inducted into the Brooklyn Walk of Fame but he was presented with the Key to Brooklyn.

The Man, The Legend, The Smooth Operator, “but it’s the Kane, so yo, you know the outcome.”