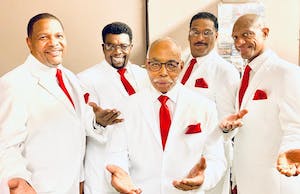 The singing group The Best Intentions delivers a top-notch Pre- Holiday Motown revue with every appearance at Yoshi's, while performing hits by such greats as Smokey Robinson & The Miracles, The Four Tops, The Spinners, Marvin Gaye, the legendary Temptations and more. It’s a soulful show that will have the audience on their feet and dancing & singing along."

Their unique style captures the true sense of what they are presenting. So if you want style, class and like the glamour of the Motown acts of the 60’s, 70’s and 80’s, the Best Intentions have become most popular in major nightclubs throughout Northern California. They have sought out longevity and stability of a career built upon these principals and is captured in their live appearances. Everywhere they go, the crowds are bigger, the ticket sales are sizzling, and the outpouring of affection for this pure Motown revue just gets greater and greater!

Based in the Oakland-San Francisco bay area, ” The Best Intentions “, a performing and recording group, is comprised of five talented vocalists, a Music Director, and a 8 piece band. Their unique harmonic, soulful tones and their smooth choreography, have come to be recognized as the signature of the group. Presenting the Original Motown Classics, Old School, and R&B sound from the 60’s. 70’s, 80’son up, has come to make them a household name among the baby boomers, as well as the new generation. The 100 years of combined experience within the group, brings a breath of fresh air to the listening audience that they perform to regularly all over the Western United States and Canada. As recording artist. they often include one of their original songs in their shows, pulling from their soon to be released C.D. entitled, ” NEVER TO LATE ” . Keeping the musical legacy alive of groups like the Temptations, Spinners, O’Jays, the Dells, etc. while creating their own sound of today, has them recognized and celebrated, as one of the Premier Vocal groups, in the Western United States and Canada. They are a must see!

Presented by Mark Elliott & The A-List Musiq Circle- Your Bay Area's Who's Who Entertainment Network.