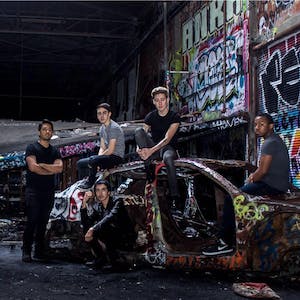 2morrows June is a 5 piece pop rock band from California’s Bay Area. The group started with Marcos and Fernando Molinar beside their close friend Vicente Padilla, back when their time after school was spent practicing cover songs in their bedrooms. Over time the trio branched out into their hometown of Richmond, interchanging members and musicians while they stacked 100+ shows under their belts as ‘the Originalz’. The core three stayed together through the search for its sound, but it wasn't until the end of high school that they met Juandiego Britto and David Burton, the two final members of the group.

“Working together has been great. Going from a 3 piece band to a 5 just felt right.”

Over the years the group has seen some amazing opportunities, having opened up for artists like Robin Thicke, Faith Evans, Mindless Behavior and En Vogue. Their music follows influences from early 2000s pop rock, but having five members ensures pull from five different tastes. The more they grow the more they use it to their advantage to write and explore.

“We are a hard working band and have so many goals and aspirations,” says Fernando.

Marcos continued after saying, “We hope to be as big as One Direction, with the longevity of the Beatles or the Rolling Stones. None of us would be where we are today without the love and support from our fans and friends and family. We can’t wait for everyone to hear the new music, and to all our new fans, welcome to the family.

Andrezia is a Cape Verdean-American singer/songwriter and actress hailing from Oakland, CA. Growing up in the multicultural Bay Area and steeped in hip-hop and R&B, Andrezia has coined her own unique sexy style of R&B infused rap.

Your Bay Area's Who's Who Ent. Network